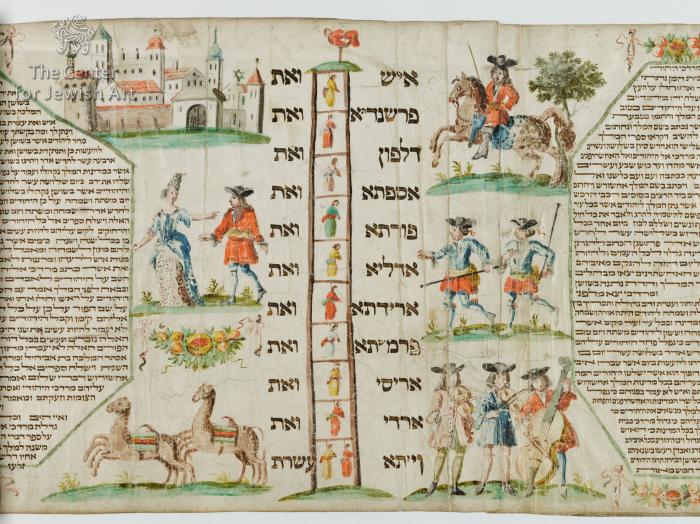 The seventh column of text is an exception in the scroll because it is not framed in an octagon and it contains only the names of Haman's sons (Es. 9:6-10) written in 11 lines divided into two half-columns and between them, the depictions of the death of Haman and his ten sons are incorporated (Es. 7:10 and Es. 9:14 or Es. 9:25). However, in this column only Haman's sons, not Haman himself, are hanged; the identity of the eleventh hanging figure is unclear, though it may be Zeresh. Haman is executed on a Catherine wheel atop the gallows, a representation rarely found in megillot Esther.

The text is surrounded by six depictions; three of them on the right are common with the sixth text panel.

1. A rider on horseback (Haman?) - it is difficult to determine which particular verse of the Book of Esther this represents.

2. Two messengers holding sticks in their hands delivering the king's decree allowing the Jews to defend themselves (Es. 8:14).

3. Three musicians playing stringed instruments - it is difficult to determine which particular verse of the Book of Esther this represents.

4. A city, perhaps Shushan. The Star of David atop one building suggests a synagogue.

5. A couple in fashionable costumes.

Illustrations nos. 1-3 are party painted on the third membrane.