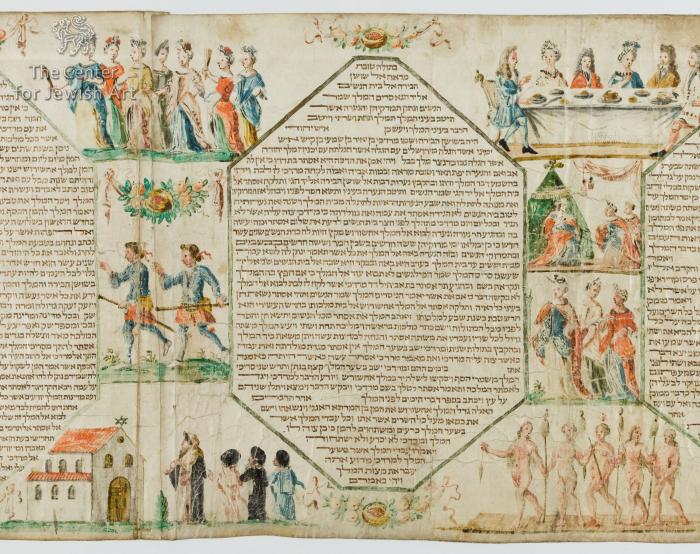 The second text panel is surrounded by seven depictions. The four depictions on the right are common with the first text panel.

1. Several men and women seated at a long table set with food - possibly depicting both feasts given by King Ahasuerus (Es. 1:3-8) and Queen Vashti (Es. 1:9).

2. The king seated under a canopy with two women kneeling before him; most likely the king choosing Esther as queen (Es. 2:17).

3. Possibly Esther as the queen (with a scepter in her hand) attended by two women, possibly her maidservants.

4. Five nude women with spindles in their hands, most likely alluding to a tale in the tractate Megillah 12b in which Vashti "would bring Jewish girls, strip them naked and forced them to work on Shabbat". However, other interpretations are possible.

7. A group of Jews standing in front of a synagogue (possibly alluding to Es. 4:3). The synagogue is presented as a high building as suggested by the Star of David above the entrance; the women's section can be seen on the left.

Illustrations nos. 5-7 are party painted on the second membrane.