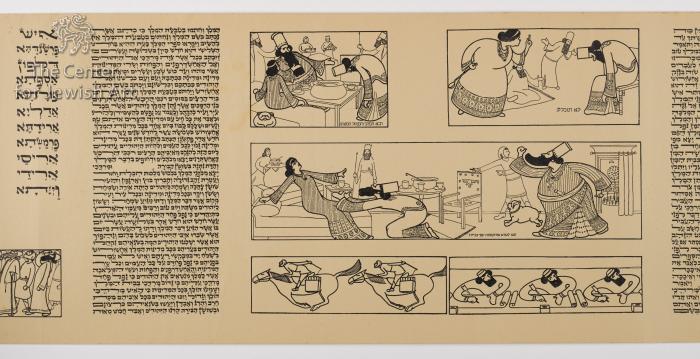 Before the 8th column of the text, 5 illustrations of different sizes (nos. 12-16) are placed. Illustrations nos. 12-14 are labeled in Hebrew.

Illustration no. 12 (upper-right corner) is labeled לא תוכל לו ("You shall not prevail against him", Es. 6:13). It shows Haman's wife, Zeresh (a rather plump woman with a ladle), and two of his friends warning him that he will not defeat Mordecai. Haman is shown sitting, with his head and arms down.

Illustration no. 13 (upper-left corner) is labeled ויבא המלך והמן אל המשתה ("So the king and Haman came to the banquet", Es. 5:5). The quotation alludes to the first feast given by Esther but other details suggest that the second queen's banquet is depicted here. Urged on, Haman arrives at the second Esther's banquet (Es. 7:1). The scene shows the king and Esther sitting at a table, while Haman bows to the king. Guards and servants are seen in the background.

Illustration no. 14 (the center) is labeled הגם לכבוש את המלכה עמי בבית ("Will he force the queen also before me in the house", Es. 7:8). On the left, Haman is begging for his life and kneeling with outstretched arms towards the queen who sits on a couch (Es. 7:8). On the right, Ahasuerus enters the banquet room from a garden and raises a fist in anger towards Haman (Es. 7:8). Next to him, a dog is running.

The scroll is preserved intact.

The scroll is formed of 3 paper sheets containing 12 columns of the text with 42 lines, except for col. 10 with 11 lines divided into two parts.

The text of the Book of Esther with the vocalization is printed in the Ashkenazi stam script with tagin, in black ink. It reflects the text copied by an expert scribe and it shows scribal practices of typical Ashkenazi megillot, e.g. enlarged and diminished letters in Haman's sons section, enlarged letters ח (Es. 1:6) and ת (Es. 9:29).

A short biography and Geismar's immigration card are available https://www.yadvashem.org/yv/en/exhibitions/bearing-witness/esther-scroll.asp (accessed on 24.10.2020).