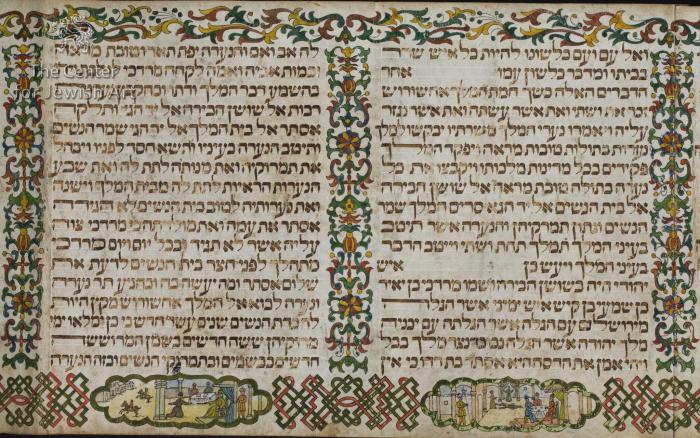 Col. 4. On the right, the second banquet given by Esther is shown (Es. 7:1). The queen sits at a round laid table and is accompanied by Ahasuerus who sits on the throne topped by a canopy, and by Haman who sits between them. In the central part of the cartouche, Haman is begging for his life and is prostrated on the floor before Esther while Ahasuerus is returning from the palace gardens (Es. 7:7-8). A king's guard stands in the left foreground holding a spear.

Col. 5. In the foreground is shown Ahasuerus seated on a throne under a canopy and a figure (Esther?) kneeling before him. The king extends his scepter to Esther (?) who outstretches her arm to touch it. In the background, two scribes sit at the table on which rest two letters. A guard stands behind the king's throne on the right. On the far left, two mounted messengers riding towards a city. The scene can be interpreted in two ways; it can depict either the events from the III and V chapters or from the VIII chapter as listed above in the "Iconographical Subject".