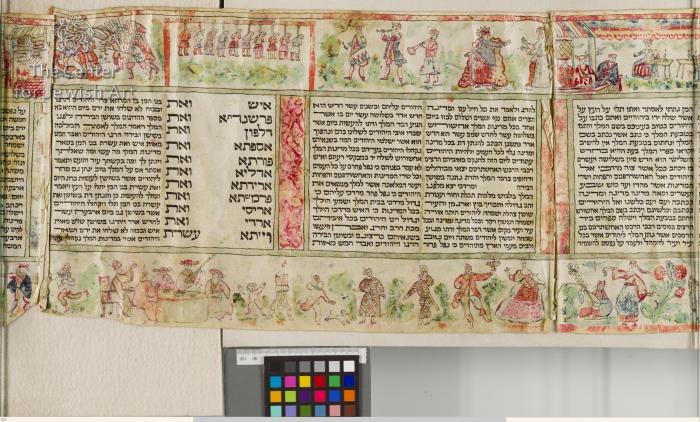 Text panels nos. 11 and 12 (sheet 6) surrounded by the hand-painted decoration.

25. In the center, the king is standing; on the right, two men are standing before him and on the left, three musicians are walking - an unidentified scene.

27. The scene of a battle - is difficult to determine which particular verse is represented here but it can be an additional day of fights (Es. 9:15-16).

24. Purim celebration, although is cannot be decided if the scene depicts the first Purim feast (Es. 9:17-23) or celebrations from the times of the manuscript's maker. We can recognize here: a woman with a pitcher, a man with a tray full of glasses, a couple in the checquered pattern costumes, a man playing with a dog, a man standing on his head, and people feasting at the table. On the far left, there is a mysterious figure of a man with a baby in his arms who appears to be running away.