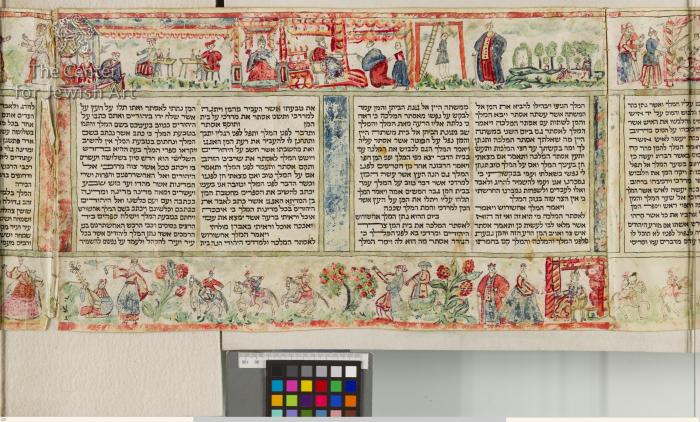 19. A pair in the garden or orchard - an unidentified scene.

21. A man kneeling before the king seated on the throne who extends the scepter to him - Mordecai before Ahasuerus (Es. 8:1), likely at the moment when the king promotes him to the position of vizier (Es. 8:2).

23. A man and a woman sit at two tables with writing tools on them - Mordecai and Esther write the Purim letter (Es. 9:29).

24. Three men in Chinese clothing sitting on a balcony (?) - an unidentified scene.

17. On the right, the king seated on the throned is shown and two people stand before him - they are Mordecai and Esther before Ahasuerus. The king extends the scepter to Esther (Es. 8:4) and Mordecai is standing next to her. This can be the moment when Esther asks for the permission to alllow the Jews to defend themselves.

23. A Chinese couple - a man is playing a string instrument and a woman is ringing a bell while dancing - an unidentified scene.