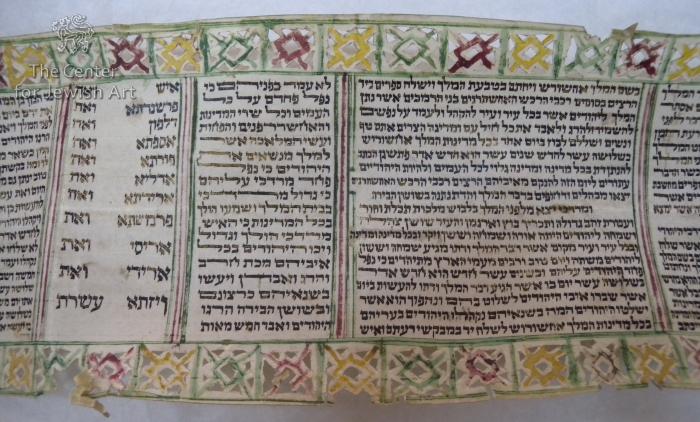 Text columns nos. 11-13 (sheet 3) surrounded by a cut-out geometric pattern. Cols. 12 and 13 are narrower than most of the columns in the scroll.

The scroll is formed of 3 membranes containing 16 text columns with 18-22 lines except for col. 13 that is written in 11 lines divided into two parts.

The text is written in black ink in the Hebrew square Oriental script, on the flesh side of parchment sheets.

The spaces between the subsequent lines of the text vary. This together with the differentiated number of the text lines causes that the density of the text in the columns is different.

In many columns, left margins are not straight.

The parchment is thin and at the same time, very stiff; the blank side of sheets is smooth and darker.

The ruling is made with a stylus along with the sheets. The lines are especially well visible in the blank spaces.