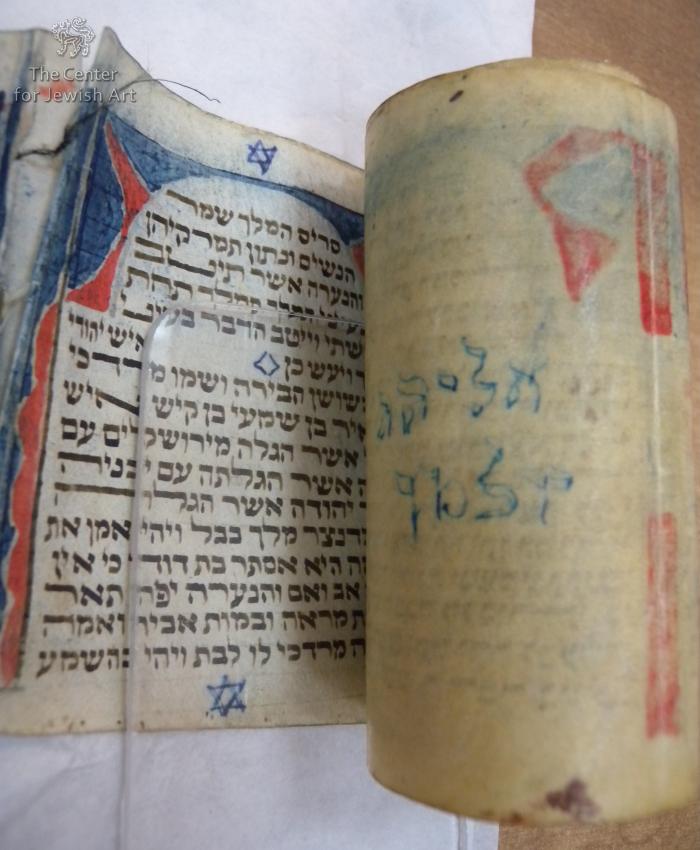 The Hebrew inscription - אליהו זלמן - written on the blank side of the sheet. Possibly they are the names of the maker of the manuscript or/and its owner.

The width of the text column in part 1 is ca. 70 mm but there are also columns that are wider and narrower.

The first part of the scroll lacks its very beginning. Additionally, the edges of the first sheet are seriously frayed.

In general, the second part of the scroll is preserved in a worse condition than the first one. The text, except for the liturgical poem in col. 1, is very well preserved.

Composed of 5 sheets containing 23 text columns but the Megillah is written on 4 sheets, in 22 columns with 16 lines. In the first column in the scroll, only the liturgical poem is inscribed.

The text is written in the Hebrew square Oriental script in black ink with brown shades on the parchment membranes that are rather thin and stiff. Both sides of sheets vary; the side with the text and decoration is rather matt, whereas another one is more smooth and slightly shiny.

The lines fit the shape of the panel, therefore the first 6 lines are shorter than the remaining lines in the panel that are of equal length. Two last lines in the columns are empty.

The letter ח (Es. 1:6) is highlighted by its form because it is the only in the scroll that is formed of two elements joined with a roof.

The text panels differ in width.

The ruling is done with a stylus along with the membranes; some lines are more clear, whereas others are less visible. The lines are particularly well visible in the decorated parts of the sheets.

Composed of 2 sheets containing 15 text columns with 17-19 lines except for col. 10 written in 11 lines divided into two half-columns.

The text is written in the Hebrew square Oriental script in brown ink, on the flesh side of parchment membranes.

The letter ת (Es. 9:29) is highlighted by its size because it is slightly larger than other letters in this part of the scroll.

The lines fit the shape of the panel, therefore the first 8-9 lines in every column are shorter than the remaining lines in the panel that are of equal length.

On the blank side of the sheet no. 2 (part 1) in blue ink are drawn Hebrew letters forming the names אליהו זלמן. They could be written by the maker of this part of the manuscript or/and its owner.

The ornamentation of the first part was sketched with a pencil and it is still visible.

The blue color on the third membrane (part 1),  is darker than on other membranes in this part of the scroll.

At present, it is not clear if any of the two parts of the manuscript was originally stitched to the rod.

The spaces between the subsequent lines in col. 10 (part 2) vary. The letters in this section are not written as larger as it was frequently practiced in megillot Esther.

The parchment of both parts in the manuscript is very different; the membranes of part 1 are brighter.

The last panel in the scroll is blank.