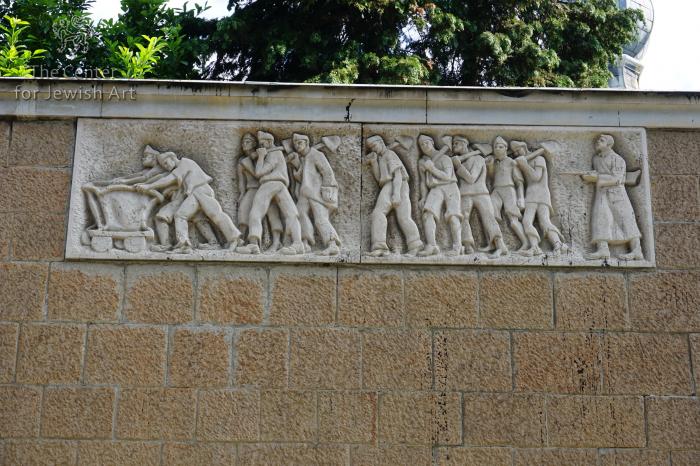 Újpest was for a long time an independent city, but since 1950 it is included the 4th district of Budapest. The history is unique, it was founded in the early 19th century intentionally as a Jewish settlement on land purchased by Izsák Lőwy (1793-1847), who was barred from other locations. He named the place Neupest / Újpest (New Pest) and it became a prosperous manufacturing center with factories mostly founded by Jews. In the 19th century, industries included wood processing, leather, vinegar, cotton, ceramics and tile, shingles, furniture, buttons and braid, alcohol, ink, and other products. Besides the synagogue, the Újpest community established all the necessary institutions of Jewish life: bath, slaughterhouse, elementary school, cemetery, women's club, girls' orphanage, cultural center, library, soup kitchen, and old age home.

Before the war, because Újpest was not part of Budapest, Jewish residents were treated like those from the country. Ten thousand Jews were forced into the “yellow star houses” (the Újpest ghetto) in the spring of 1944. They were later taken to Békásmegyer, where they were squeezed into cattle cars and sent to Auschwitz. The deportation began on July 3rd, just a few days before the region ordered the suspension of deportations, and it ended a few days after the order. Of approximately 20,000 pre-war Jewish residents of Újpest, only about 3,000 survived.

During the Nazi occupation, the synagogue was looted and partially destroyed. After the war the synagogue was restored by the Jewish community and a Holocaust memorial listing the names of over 12,000 victims was added next door. The memorial was unveiled by Hungarian President Zoltán Tildy in 1948.

In 1947-48 Hungarian-Jewish artist Edith Kiss created a series of four stone reliefs for the memorial. She had been deported to the Ravensbrück concentration camp in northern Germany and then transferred for forced labor at the Daimler-Benz factory at Ludwigsfelde. Later she was sent on a death march from Ravenbruck but managed to escape and eventually returned to Budapest in 1944, which she began to represent her experience in an album of paintings.