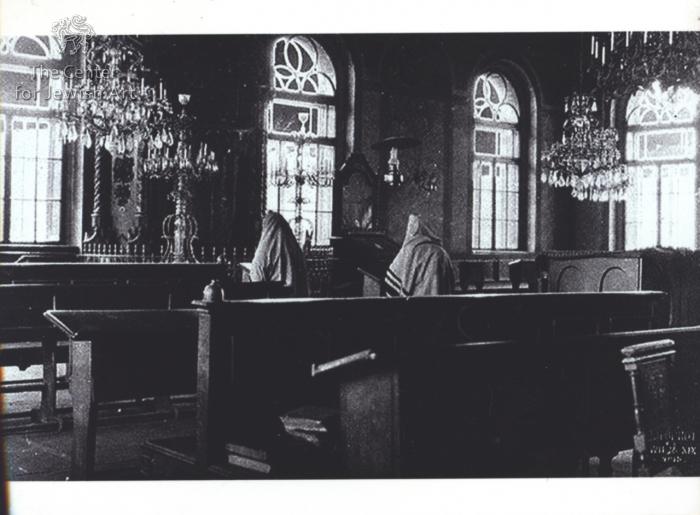 This Kloiz is one of the most important buildings of the Hassidic courts.  It represents and embodies the "royal" way of behavior, which characterized the Ruzhin-Sadgora dynasty. The Sadgora Kloiz served as a model for other buildings built by the members of the dynasty, especially the Kloiz in Chortkov, and also by members of rival dynasties, for example, Vizhnits.  Several Hassidic stories compare this building to theJerusalemTemple.

The Tzaddiks of the Ruzhin-Sadgora dynasty did not pray with their Hassidim, but had a separate prayer room near the main prayer hall.  This arrangement was started by R. Israel of Ruzhin and is noteworthy in all Kloizes of his descendants (Assaf, pp. 372-3, Even, pp. 3, 83, 153).

Since the women did not take part in the Hassidic rituals at all and especially in the "pilgrimages" to the Tzaddiks during Saturdays and Holidays, the women's section of the Kloiz, if it existed, served only women living in the court, i.e. the family members and servants.

Suggested Reconsdivuction
History/Provenance
The building was a part of the court compound of the Tzaddiks of Ruzhin - Sadhora. Rabbi Israel Friedman of Ruzhin (1796-1850) established his court in the town in 1842, after his flight from Russia. This building is probably the New Kloiz, which was planned in the last years of R. Israel and was built by his son, Rabbi Avraham Yaakov of Sadhora (1819-1883). Hassidic legend tells, that when R. Israel of Ruzhin showed the plan of the building to the Tzaddik of Skvira, Rabbi Moshe, the latter became white as a wall and shouted: "Be merciful, Rebbe, and do not build this Kloiz." After R. Israel's death, the Skvirer Tzaddik explained his plea: He saw in the plan, that the Ruzhiner had in mind the same intentions (כוונות) as Moses when he was building the Tabernacle. He feared that after the inauguration of the Kloiz the same tragedy (קידוש השם) would befall them, as when the two elder sons of Aharon suddenly died. Rabbi Israel indeed did not built the Kloiz. His son, Rabbi Avraham Yaakov hoped, that with the power of his father and with his own power he would be able to protect his children from that fate. Nonetheless, the good deeds (זכות) of the two great Tzaddiks could not protect them. Within two years, 1882 and 1883, two elder children of R. Avraham Yaakov, R. Shlomenu and R. Nahum Berenu died. Several months later the old Tzaddik also died (Even, pp. 84-85). There are other legends, stating that the Kloiz was previously the palace of Baron Mustatza, the owner of Sadhora, and that R. Israel of Ruzhin received it as a present or bought it (Asaf, p. 370). In 1882, a new steel Torah ark was made, following the desecration of the Torah scrolls during a robbery attempt of the Kloiz (Even, p. 216-7). The building also served the successive Sadhora Tzaddiks. In 1883-1886, two sons of R. Abraham Yaakov tried to live together in the town, but in 1886 Rabbi Itzhak (1850-1917) removed his seat to Boian, and Rabbi Israel (1852-1907) stayed in Sadhora. After his death, his sons Rabbi Aharon (1877-1913), Rabbi Abraham Yaakov (1884-1961) and Rabbi Shlomo Hayiim (1887-1972) became the Tzaddiks. The two latter left Sadgora at the beginning of the First World War and moved to Vienna. According to the testimony of Semion An-sky, the residence of the Tzaddiks was not damaged during the Russian occupation, although the town itself was plundered and destroyed. After World War II, the building was nationalized, and used for local purposes. In the 1960s-1990s, it was used as a workshop for repairing vehicles. Consequently, an industrial structure was attached to its east side, and new doors, walls and staircases were added. Since the late 1990s, the building has been abandoned and was deteriorating rapidly.
Main Surveys & Excavations
Bibliography

Ansky, Solomon, The Enemy at His Pleasure: A Journey Through the Jewish Pale of Settlement During World War I, trans. Joachim Neugroschel (New York, 2002), p. 281.