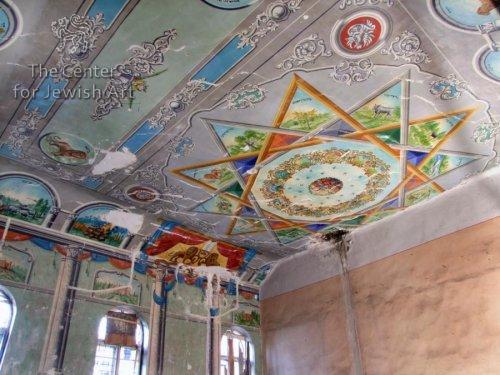 The synagogue was build in 1919 according the list of donors’ names, preserved on the western wall of the prayer hall. The wall paintings in the synagogue building’s interior were made at approximately in the 1920s, as is made clear by the list of the donors’ names, which includes the name of the person who contributed money specifically towards this purpose.

After WWII, in 1951 the building was converted into a youth club (house of Pioneers) and no longer functioned as a synagogue (Altsuler, p. 454); the paintings were whitewashed with lime, and so preserved over time.

In 2009 the paintings were discovered by Svetlana Amosova and cleaned by a team of Kiev specialists guided by Yulii Lifshits. Except for some minor losses due to architectural replanning, virtually the entire composition of the interior is preserved intact.

For the exterior see:

See also photographs of the interior before the cleaning:

For the documentation of 1999 see: