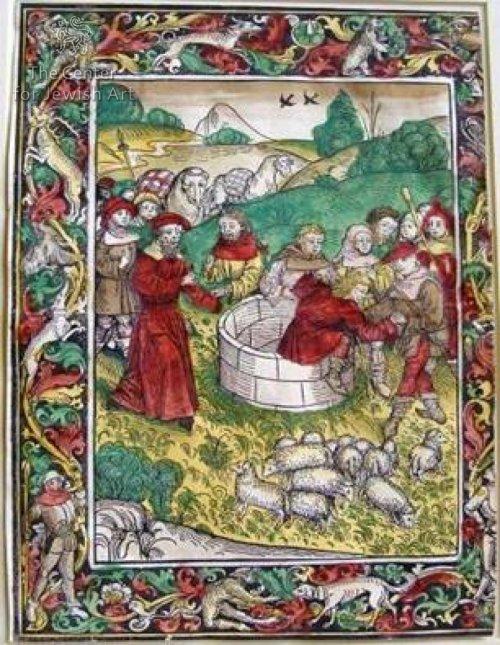 Joseph wearing a short red garment and boots, is being pulled up from the well, probably by Judah who suggested selling him to the passing Ishmaelites, who are seen at the back with their two laden camels     (fig. 1). Behind the well a second brother, his left hand filled with coins, demands with his right index finger the last coin from a dignified merchant wearing a red hat and robe, and with a purse hanging from his belt. The other seven brothers of Joseph are looking on the right. They are wearing shepherd's cloths, boots and various headgear. In front of the well their herd of sheep is grazing. Framing the scene is an acanthus scroll inhabited by men with dogs hunting a bear, a deer and two monkeys.

The text in the Schatzbehalter (BSB Rar. 293, fols. 46v, 48r), corresponding to this image (figs. 1, 2), belongs to the eleventh counter-design (Gegenwurf), which appears with the same title as above: No. 5 Alle Wirdigkeit hat Cristum bedeut. It deals with Christ’s dignity, prefigured in the firstborn persons of the Old Testament. In his text relating to this image (fig. 2), Fridolin discusses the matter of sale of the first-born in the Old and New Testaments. Since the first-born males belong to God (Num.18:15) and therefore to the priests, Christ was redeemed by being sold to his mother as seen in the thirteenth depiction (Redemption of the firstborn). Later, he was sold by Judas Iscariot and handed over to the priests. In the fourteenth depiction, of the sale of Joseph (Gen. 37:28), Fridolin compares the sale of Christ to that of Joseph, who was first sold by his brothers and then by the Midianites and Ishmaelites in Egypt. Christ, the son of God, born before all creatures, recalls Joseph, who was the actual firstborn son of the beloved Rachel and Jacob. Thus, according to Fridolin's reference (see his note 103) to the Sermon of Leo the Great Pascali sacramento, he is the prefiguration of Christ.