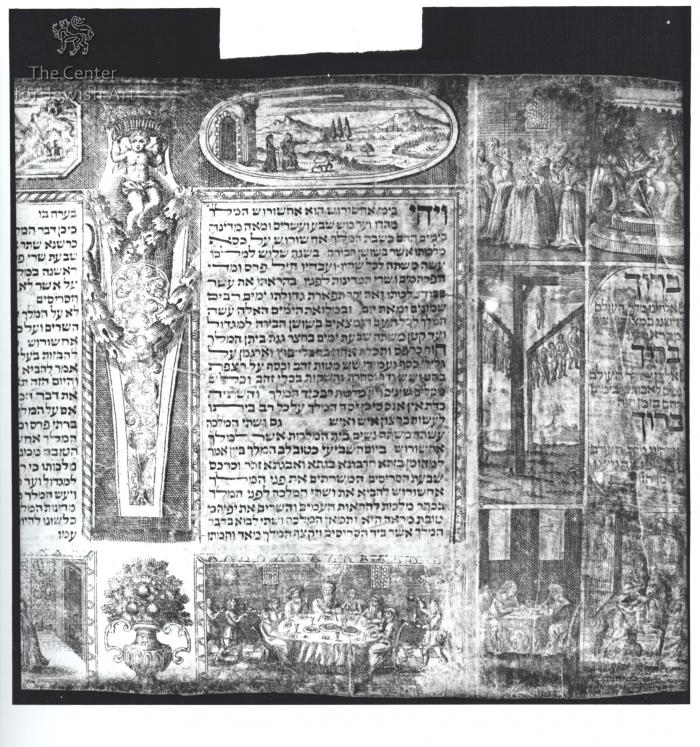 Opening decoration: The scroll opens with a panel containing several narrative scenes from the Esther story. In the decorative panel, in the central part of the upper register, there is the royal couple seated on the throne with a canopy that is placed on a pedestal. The king and the queen are accompanied by courtiers; on the right, the princes of Media and Persia are standing (this part of the decoration is invisible on the image; Es. 1:14) and Esther's maidservants on the left (Es. 2:9). Below, there are three rectangular frames: the central panel contains the benedictions recited before the Megillah reading, while the panel on the right shows the chamberlains, Bigthan and Teresh, hanging on two gallows (this part of the decoration is invisible on the image; Es. 2:23), whereas the one on the left depicts Haman and his sons hanging on three gallows (Es. 7:10 and Es. 9:14 or Es. 9:25). The lowest register contains three episodes that are (from right to left): Mordecai receiving the clothes from Hatakh (invisible on the image; Es. 4:4), Haman leads Mordecai through the streets of Susa (Es. 6:11), Esther and Mordecai write letters instructing the Jews to observe Purim (Es. 9:29).

In the upper margin landscape no. 1 is printed and in the lower margin, there is the first frame in which the fest of Ahasuerus is represented (Es. 1:3-8). Six men seated at a round laid table are depicted and on either side of the table, servants are visible.

Formerly in the collection of the Bibliotheca Rosenthaliana in Amsterdam (Ros 537). The current location of the manuscript is unknown.