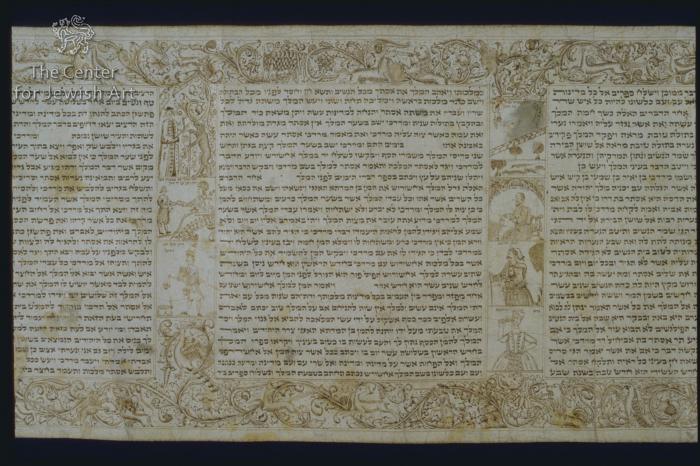 © Center for Jewish Art, Photographer: Unknown,
<p>To the left of the text column:</p> <p>In the upper panel is a man training a bear stands against a foliate background at the top of the right margin. The man wears a black hat with a brim and a long buttoned coat, and trains the bear with a whip, held in his right hand. The bear stands on its hind legs and holds a stick in its paws.</p> <p>The top panel in the margin to the left of the text column, encloses the crowned Ahasuerus sitting on a throne. He holds a scepter in one hand and gives his ring to Haman with the other, after having removed it from his finger. Haman stands before the king and stretches out his hand towards him. Hebrew inscription is written above the scene as follows,  ,ויסר המלך את טבעתו מעל ידו ויתן על יד המן "And the king took his ring from his hand and gave it unto Haman" (Es. 3:10).</p> <p>The bottom panel in the margin to the left of the text column encloses Haman standing and holding a balance with scales full of coins. He has a moustache and wears a tall, stiff hat. An open box of coins rests on the ground before him. A Hebrew inscription is written above him as follows, המן שוקל את הכסף "Haman weighing the money" (Es. 3:9).</p>
Name/Title
JHI Sepia Esther Scroll | Unknown
Object
Esther scroll (megillat Esther)
Object Detail
Cols. 3-4
Date
18th century (1740?)
Synagogue active dates
Reconstruction dates
Artist/ Maker
Unknown (Unknown)
Origin
Europe | Central Europe
| Vienna (?)
Historical Origin
Unknown
Community type
Unknown |
Congregation
Unknown
Location
Unknown |
Site
Unknown
School/Style
Unknown|
Period
Unknown
Period Detail
Collection
Poland | Warsaw | The Emanuel Ringelblum Jewish Historical Institute in Warsaw (JHI)
| C-326
Documentation / Research project
Unknown
Category
Hebrew Illuminated Manuscripts
Material/Technique
Ink on parchment
Material Stucture
Material Decoration
Material Bonding
Material Inscription
Material Additions
Material Cloth
Material Lining
Tesserae Arrangement
Density
Colors
Construction material
Measurements
The scroll: ca. 190 mm x ca. 1590 mm.
Length of the sheets in the scroll: 1) 685 mm, 2) ca. 680 mm, 3) ca. 225 mm.
Dimensions of the selected details in the scroll:
- text panels: 131-135 x ca. 82-123 mm;
- text panel 9: 134 x 106 mm;
- decorations in the spaces between the text panels: ca. 26-35 mm (width);
- opening decoration 178x55 mm;
- the blank section on the right edge of the first membrane: 37 mm (width);
- decorations in the upper and lower margins: ca. 23 mm;
- an average letter: ca. 2 mm (height);
- the letter ח in Es. 1:6: 4 mm (height);
- letters in col. 9: 8 mm (height).
Height
Length
Width
Depth
Circumference
Thickness
Diameter
Weight
Axis
Panel Measurements
Subject
E | Esther, Book of (following the order of the story) | Ahasuerus handing his ring to Haman (Es. 3:10)
E | Esther, Book of (following the order of the story) | Haman paying money to the king (Es. 3:9)
B | Bear | Man training a bear
|
Condition