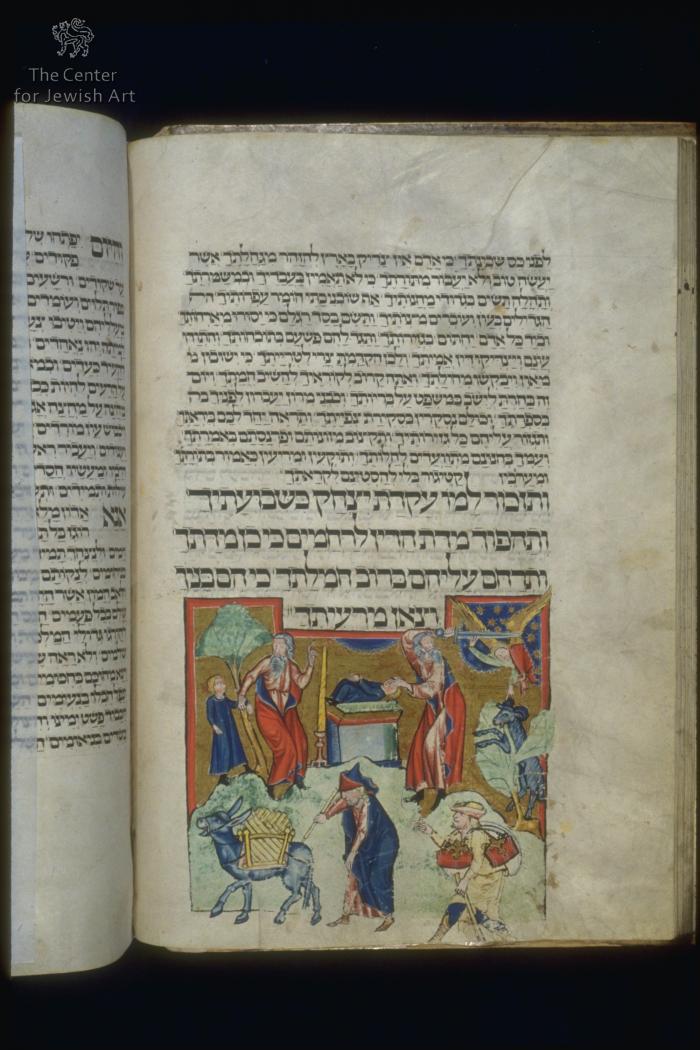 The panel in the lower part of the page which illustrates the prayers for the second day of the New Year service, contains three successive scenes of the sacrifice of Isaac.

In the foreground of the picture, the two servants and an ass stand at the foot of a mountain (Mount Moriah ?). Both servants wear peasant hats. The one on the right carries water cans and the one on the left drives the ass which carries fagots on its back.

Two scenes divided by a candlestick are set at the top of the panel: on the left, Abraham walking with Isaac and on the right, the sacrifice of Isaac. On the top left, Abraham and Isaac are depicted walking and talking on their way to the site of the sacrifice. Abraham, bare-headed with a long beard, holds Isaac's arm with his right hand and points upwards with the index finger of his left hand. On the top right, Abraham stands resting his left hand on Isaac's forehead and lifting a sword in his right hand. The young Isaac lies on a high square altar with his hands tied. A winged angel emerges from a patch of starry sky on the top right of the scene and touches Abraham's sword. The angel points downwards with his left hand to a leaping ram, as described in the Midrash (Pirkei de Rabbi Eliezer 31). The body of the ram is caught in a tree. Isaac's eyes and those of the angel are scratched out, while the eyes of the other figures are either covered or closed. The lower part of the panel was cut off during a subsequent binding of the manuscript.