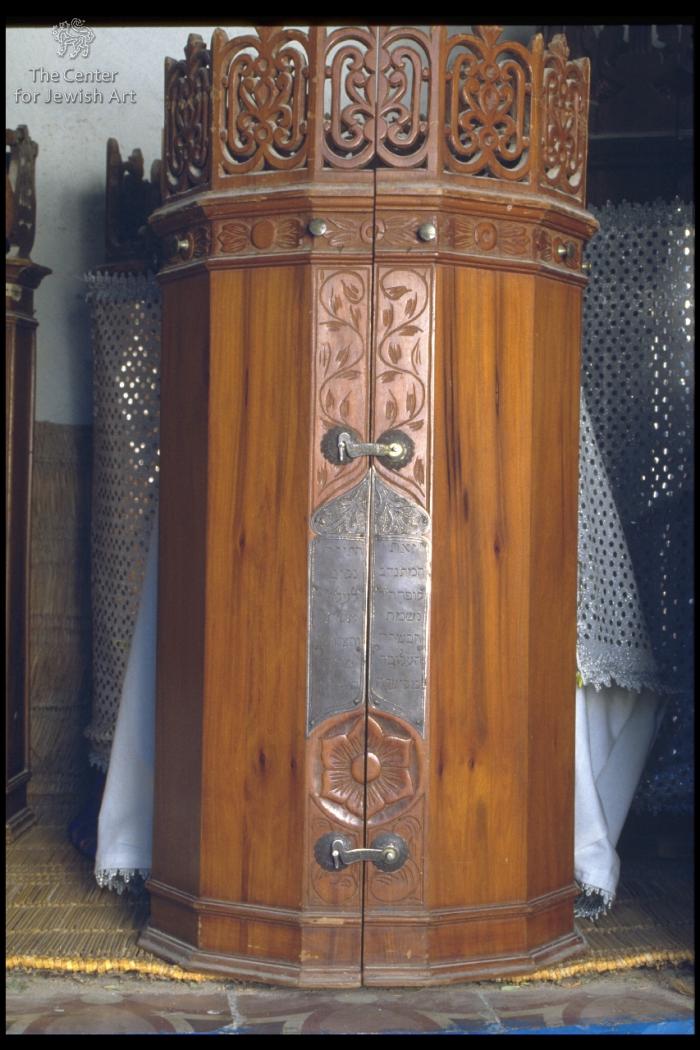 The body is comprised of twelve facets and is encircled, at its upper and lower edges by two pairs of strips, creating two friezes. The two extreme strips are stepped. The upper frieze is decorated with a foliate pattern and a knob for hanging a wrapper is attached to each facet.

An arched silver plaque inscribed with a dedication, is attached to the center of the front facet (fig. 1). It is divided in its middle into two vertical parts following the case's opening. The dedication is written in square letters and reads:

“This Torah (case) was donated by Nissim Sofer (the scribe), May the Lord sustain him and grant him favour. (Donated) for the exaltation of the soul of his wife, the conscientious and modest the humble Mrs. Mass’udah, May her soul be bound in the bond of life.”

Scrolled branches are depicted within the onion-shaped arch, while two additional branches are engraved on the front facet, above the plaque. A round flower enclosed in a medallion, is set below the plaque, surmounting two scrolled leaves. A double hinge mechanisms set on floral circlets, are above and below the plaque.

The open-work coronet is composed of twelve units which continue the body's facets. Each unit is formed of symmetrical pattern consisting of a fleur-de-lys at its centre framed by two pairs of rounded scrolls. An additional fleur-de-lys tops each facet. The connecting points between the facets are topped by a bud. The inner face of the Torah case is plain wood. Each half has a double shelf at its bottom and its top. The lower space is blocked by a bar with a rectangular opening at its side for inserting the hands while raising the Torah. The upper space is blocked with a wooden tablet decorated with open-work scrolls.