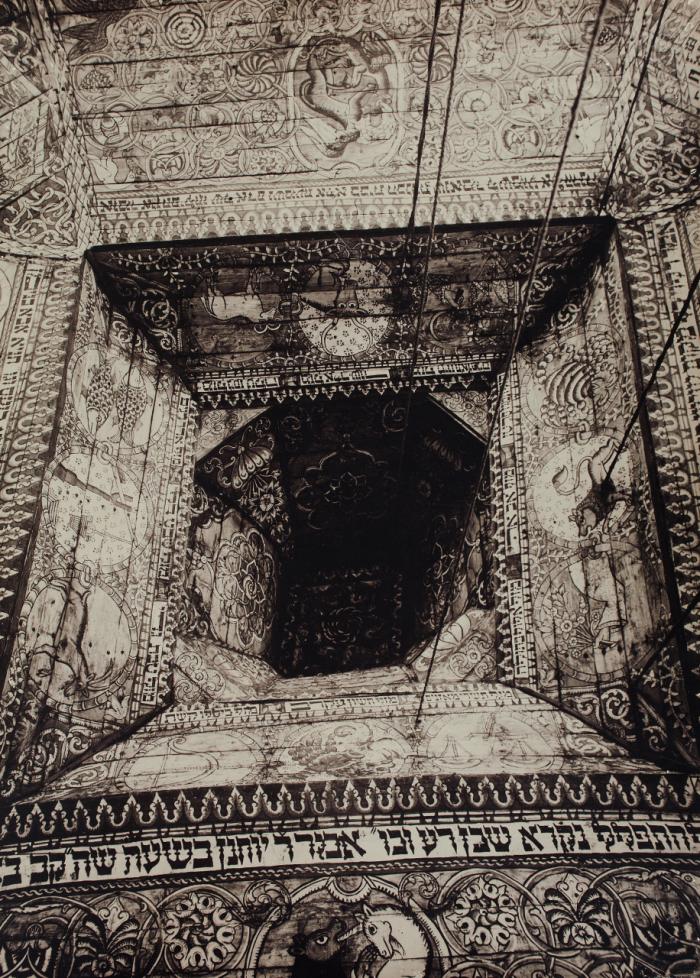 The murals of the vault, constructed as a hierarchical composition, correlated with architectural structure of the vault.

The entire surface of the vault are covered with a set of floral ornamentation consisting of flowers and fruits, among which were placed medallions of various shapes, filled by a single motif or text. Each part of the vault are separated from other by decorative friezes and inscriptions.

The first step (square vaulting) are decorated by Zodiac cycle. Each of the zodiac signs is situated in round medallion and is designated by inscription. Each side of the square are filled by three zodiacs, which corresponds to the four seasons.

The second step (octagonal vaulting ) has complicated decorative program. Four trapezoidal parts of this step of vaulting are divided on two levels. The upper level consist of central placed focal images (Two griffins supported the Tables of Low , Lion and Unicorn in “combat” , Two Griffins in combat, Lion and Unicorn in “combat”, Bear holding a shrub or branches) , which is flanked by secondary images. The lower level was made as wide band (frieze) decorated by animal’s images.

The triangular pendentives also divided on two levels. The upper level was filled by inscription putted inside portal-shaped frames. In the lower level are depicted an images  (Leviathan encircled a city, Bull – Shor,Elephant with the tower on the back).

The flat triangular spaces between pendentives and the last rectangular frame of the vault are filled be images of:  The heraldic eagle, Three rabbits running after each other in a circle (twice), Three intersecting fish.