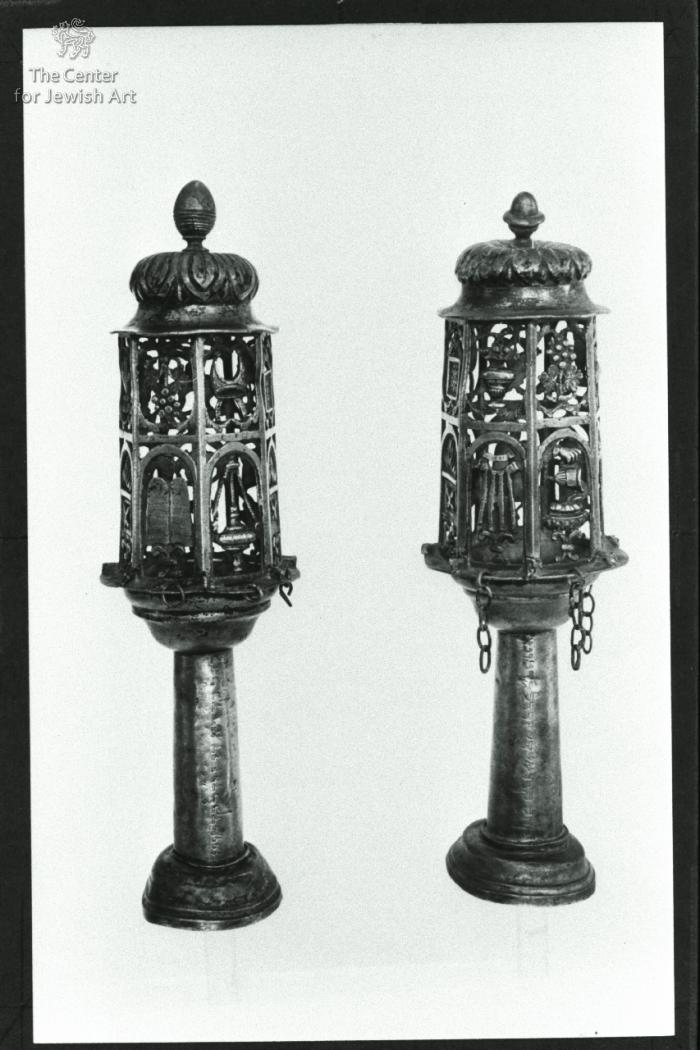 The tower-shaped body is encircled by Sanctuary Implements and foliate motifs.

Summary and Remarks
The type of Torah finials common in Egypt during the 20th century is a cylindrical object, considered to be the characteristic Egyptian type (see: Sc.258- 5 the finials topping the case). However, this frequently seen design probably developed only in the end of the 19th century and does not reflect the earlier types of finials characteristic to the Egyptian communities. This tower-shaped finial is part of a group of Egyptian finials that attests to an earlier visual tradition, common to the North Africans communities. The finials shaped as prismatic towers, formed of lace-like openwork, resemble mostly the finials originating in Tunisia and Libya. A comparison between them reveals a mutual shape and decoration, although each features a particular local style. A large group of finials shaped as towers were originally dedicated to a now destroyed synagogue named Abu Zaradel in Alexandria. According to an archival photo (Archive of the Jewish Community in Alexandria) showing a dedicatory plaque, the synagogue was built in 1381 by Judah son of Saul the Sephardi Abu Isaac. In 1881 the synagogue went through renovations, which changed it completely. The Spanish origins of the founder (Saul the Sephardi), does not testify to the identity of the congregation who prayed in the synagogue during later periods. Dedications inscribed on other ritual objects donated to the Zaradel synagogue reveal that some of them were of North African origin, known as Mugrhabim, as the finial donated by Jacob Zuaris and his sons, who originated from Guarish (Gawarish) in Libya (Sc. 260-32). It is possible that this type was presented to the local tradition by the Jews who immigrated to Egypt and established there a community, known as the Mugrhabim (see: Bibliography). The finial described above differs from the others in this tower-shaped group, mainly by the Sanctuary Implements attached to it. The shape of the tower and especially the Implements may attest to a Tunisian tradition. Implements decorating finials were introduced to the Tunisian tradition with the Italian Jews who lived in Tunis and established a community there, known as “the Leghorns” - those who came from Leghorn, in north Italy (see: Sc_96-21; Sc_260-24). An Italian translation added to the original 1381 dedication, bears witness to an Italian Jewish congregation in the Zaradel synagogue. It is possible that with the emigration of Italian Jews to Egypt, a similar process of influence as occurred in Tunis, also took place in Egypt. Yet, it is also possible that this type was brought by the Mugrhabim.
Suggested Reconsdivuction
History/Provenance
The finials were originally donated to the Old Zaradel synagogue in Alexandria, however in the beginning of the 20th century they were transferred with other ritual objects to another synagogue, where it was documented.
Main Surveys & Excavations
Bibliography
Amar, Ariella. The Ritual Objects of the Egyptian Jews. In Egypt, Edited by Nahem Ilan, Jewish Communities in the Nineteenth and Twentieth Centuries, Jerusalem: Ministry of Education and Ben-Zvi Institute for the Study of Jewish Communities in the East of Yad Yizhak Ben-Zvi and the Hebrew University of Jerusalem, 2007. In print. In Hebrew. Ben Sasson, Menahem. The Emergence of the Local Jewish Community in the Muslim World Qayrawan, 800-1057. Jerusalem: The Magnes Press, The Hebrew University, 1996. In Hebrew. Bornstein-Makovetzky, Lea. The Community and its Institutions. In The Jews in Ottoman Egypt (1517-1914), edited by Landau Jacob M., 129-217. Jerusalem: Misgav Yerushalaim, 1988. In Hebrew. Grafman, Rafi, ed. 50 Rimonim: A Selection of Torah Finials from a European Family Collection. Tel-Aviv: Tel-Aviv University, The Judaica Museum, The Cymbalista Synagogue and Jewish Heritage Center, 1998. In English and Hebrew. Toledano, Jacob Moses. Batei haknesiot ha-atikim be-alexandria u-svivoteiha (The old synagogues in Alexandria and its surroundings). In HUCA XII-XIII (1937-1938), 701-714. In Hebrew. Sothebys, Important Judaica. Tel-Aviv, 15.4.1998.
Short Name
Full Name
Volume
Page
Type
Original
Documenter
Rina Ben Yair (Talgam) | 06.84
Researcher
Ariella Amar | 06.06
Architectural Drawings
|
Computer Reconsdivuction
|
Section Head
Ariella Amar | 06.06
Language Editor
Judith Cardozo | 06.07
Donor
UNESCO |
Object Copyright
Sc_260
Negative/Photo. No.
Edit Img. ID: 22374