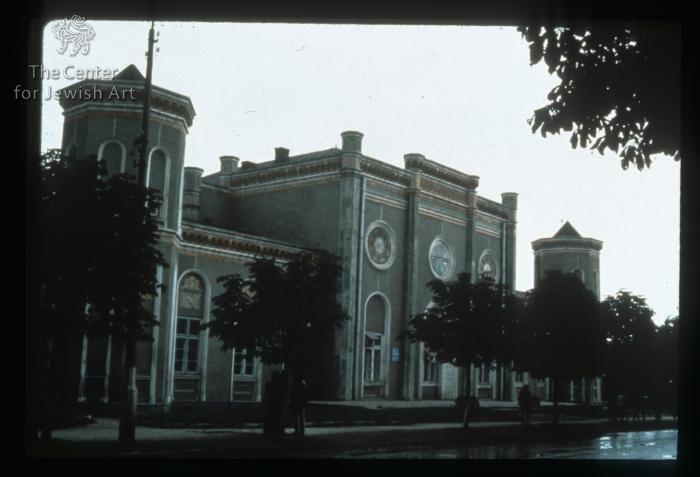 The building of the Kloyz was a part of the court of Rabbi David Moshe Friedman of Chortkov and of his son, Rabbi Israel.  The complex of the court included three buildings – the Kloyz, the dwelling palace of the Tsaddik and the large public hall, called "Salash", and a garden. Of all these buildings, only the Kloyz remained. The court was situated in the southern part of the town of Chortkiv.

The building of the Kloyz consists of a two-storey high central volume, which includes a prayer hall with a vestibule, and two one-storey lateral wings in the south and north, which have two double-storey towers in their west corners.  The building stands on a podium, under the wings, two cellars connected by a corridor are situated.

All facades of the building are plastered. Their corners are emphasized by octagonal columns, topped by octagonal turrets.  The facades are topped by a parapet of stylized machicolation, beneath it a strip of geometric interlacing ornament surrounds the whole building.

The central volume is two storey high.  The eastern part of the volume comprises a square prayer hall, which has twelve windows: four in each the east, north and south walls.  On the west side, the volume is divided into two floors.  Situated on the first floor is a vestibule and two rooms.  On the second floor, there are three rooms, possibly a women's section.  The prayer hall is broader than the vestibule section.  The entire volume is covered by a hipped roof.

The main, west facade is divided into three bays by four octagonal columns, two of which are situated in the corners. The parapet of the central bay is lifted, and under it, on the level of parapets of the side bays, is situated an additional large freeze decorated with foliage inserted into circles.  Under the geometric strip a moulded architrave is placed.  In the lower tier of the facade is the main double door in the central bay and high windows in the side bays. The door is situated in an arched portal, with a jamb decorated by four colonnettes.  The windows are placed within shallow round arched niches with moulding frames. (The door and the windows have been converted into rectangular windows). Under the window sills depressed panels are placed.   In the upper tier of the central bay there is a round window with a plaster moulding frame; in the side bays there are moulding frames of the same size, containing a mascaron of foliage.

The east, south and north facades are very similar. Each of them has four round arched windows within a shallow niche with moulding frames.  In the centre of the east, back, facade a shallow niche of the same form emphasizes the interior placement of the Torah ark. In the upper part of the facades there is a horizontal moulding which forms a kind of architrave.  The strip of geometrical decoration under the cornice is cut by small rectangular openings providing light to the attic.

On the south and north sides of the western part of the central volume, two lateral wings are adjusted.  They are one-storey and almost square in plan.    All the openings are situated within shallow round arched niches with moulding frames: a high arched door and two rectangular windows on their west facade, a pair of rectangular windows on the east and the corresponding south and north facades. (The doors have been remodelled into rectangular shapes, and part of the windows are bricked up.)  The upper parts of the niches, above the windows, are decorated by two mascarons of floral motifs: the lower one is rectangular, with a flower in the middle; the upper one is half-round.  Suppressed panels are placed beneath the windows on all facades, except for the east one.  Small doors leading to the cellars are situated on the east facade, close to the central volume.  Each wing is covered by a hipped roof with three slopes.  Chimneys protrude from the centre of the roofs.

On the western edges of the wings, two two-storey octagonal towers are attached.  The floor division is articulated by a cornice and a strip with a geometric ornament, which continue those of the wings.  The towers have one octagonal room on each floor.  On the exterior, each tower has five narrow arched shallow niches with moulding frames on each floor, where arched windows are situated (currently all windows are blocked).  Beneath the windows suppressed panels are placed.  Above the windows of the first floor, there are sets of mascarons resembling those of the wings.  Each tower has a tent roof.

Description of the Interior:

The prayer hall is square (rib of 20 m) with twelve high arched windows.  The east, south and north walls are regularly subdivided into five axises each: the east one has four windows and a central place for the Torah ark; the south and north ones have four windows and a blind niche of the same dimension in their west parts. The niches contain doors towards the lateral wings (currently blocked).  The west wall has five niches of the same dimensions – one in the centre and the others grouped in pairs, situated near the south and north walls.  In the central niche, the entrance door is situated on the lower tier and an arched window from the central room of the women's section on the upper tier.  In the two side niches, which are closer to the centre, there are arched windows from the side rooms of the women's section. (Currently, only two niches are preserved, the windows are blocked.)

The decoration of the hall is very elaborate. The windows are decorated with moulding frames with keystones and connected by horizontal moulding cornices on the level of the keystones and imposts.  Another huge cornice is situated above the windows. The fields between windows are filled with stucco foliage.

The ceiling is divided by mouldings into nine fields of unequal size. In the central by an octagonal moulding frame comprises a huge foliage rosette, from which a chandelier is hung.  Other fields are also filled with stucco foliage.

The Torah ark, situated in the centre of the east wall, is trapezoid in plan and two tiered. Its four edges are decorated by twisted collonettes in the first tier, and by smaller ones in the second.  Fields between the collonnettes are filled with foliage decoration.  The ark is topped by an architrave with brackets.  Above its central part, two heraldic lions hold the Tablets of the Decalogue, topped with a crown.

Currently, the decoration of the walls and of the ceiling, as well as the Torah ark and the Bimah are lost.

Western part of the central volume

On the first floor the rectangular vestibule connects between the outside and the prayer hall. On its south and north sides, there are two rooms, but they have no connections with the vestibule and are entered from the lateral wings.

Each wing comprises a corridor, which is situated next to the central volume and has an outer door on the west facade; a rectangular room in its eastern part, a square and a polygonal room in its western part and an octagonal room inside the tower.  From the corridor, there are accesses towards the side rooms of the central volume, the square rooms and the rectangular rooms.  The latter have doors leading into the prayer hall.  Supposedly, the southern rectangular room served as the private prayer room of the Tsaddik (like in Sadgora Kloyz). The height of the rooms in the lateral wings is about 4 m, above them there is an attic floor of about 2 m high.  The original access to it is unclear.  From the attic floor, a door leads into the intermediate floor of the towers.  The upper, four meter high floor of the towers was probably accessed through an opening in the ceiling of the intermediate floor.  Under each lateral wing there is a cellar, accessed through a small door on the east facade.  Probably, the two cellars were connected by a corridor under the central volume.

For support of the ceiling in the prayer hall four octagonal columns were inserted in its centre.  To these columns two partition walls were attached, thus dividing the hall into three long rooms.  The central one is used as a movie hall, the north and south ones are divided into two floors.  The southern rooms on the both floors are sub-divided into smaller ones. To the west wall of the prayer hall the staircase was attached, it gives access also to the former women's section in the western part of the central volume. The windows from the women's section towards the prayer hall are blocked or converted into doors. The eastern rooms in the lateral wings are also sub-divided to allow establishment of the rest rooms in the correspondingly south and north edges.

Suggested Reconsdivuction
History/Provenance
Rabbi David Moshe Friedman of Chortkov (1827-1903), the fifth son of Rabbi Israel of Ruzhin established his court in Chortkov after the year 1869 (Asaf, p. 463). The dwelling palace was probably bought from the princess Jeronima Borkowska in 1865 (Sefer Chortkov, p. 31; Asaf, p. 370, n. 17). Therefore, the Kloyz was built after that date. According to the Hassidic tradition, the Kloyz was planned by R. David Moshe's son, Rabbi Israel (Asaf, p. 370). Although the court of the Chortkover Rebbe had no influence in the Jewish community of Chortkov (Asaf, p. 366, n. 9; Sefer Chortkov, p. 69), it was an important factor in the economic life of the town, since thousands of Hassidim arrived to see the Rebbe, especially during the Holydays, and also served as an attraction to inhabitants, especially the large park (Sefer Chortkov, p. 70). After R. Moshe David's death, the Kloyz served his son and successor, Rabbi Israel (1854-1934). In 1914, with the start of the First World War, he fled to Vienna, where he lived until his death. However, he used to visit Chortkov during the Holydays (Sefer Chortkov, pp. 57, 61-2). After the Second World War the building was used by an engineering-building military unit. Part of the roof constructions were removed for use as building material, which caused the beginning of the ceiling's collapse. To prevent the collapse, four octagonal columns were inserted into the prayer hall. In the 1980s, the building was remodeled for the Centre of Youth Art.
Main Surveys & Excavations
Bibliography
Alfasi, Itshak, Hahasidut midor ledor, vol. 1 (Jerusalem, 1995), pp. 61-67; Asaf, David, Derekh hamalkhut: r. Israel miruzhin umekomo betoldot hahasidut (Jerusalem, 1997), pp. 367-373; Austri-Dunn, Yeshayahu (ed.), Sefer yizkor lehantzhat kdoshei kehilat chortkov (Haifa-Tel Aviv, 1967); Even Itzhak, Funem rebens hoif: zikhroines un maises (New York, 1922; reprint: Israel, 1970).
Short Name
Full Name
Volume
Page
Type
Documenter
Z. Lagush, Z. Horbach |
Researcher
Vladimir Levin | 2001, 2016
Architectural Drawings
Z. Lagush, Z. Horbach |
Computer Reconstruction
|
Section Head
A. Cohen-Mushlin | 2001
Language Editor
J. Cardoso, S. Oren | 2001
Donor
|
Object Copyright
Negative/Photo. No.
A09195
Edit Img. ID: 214252