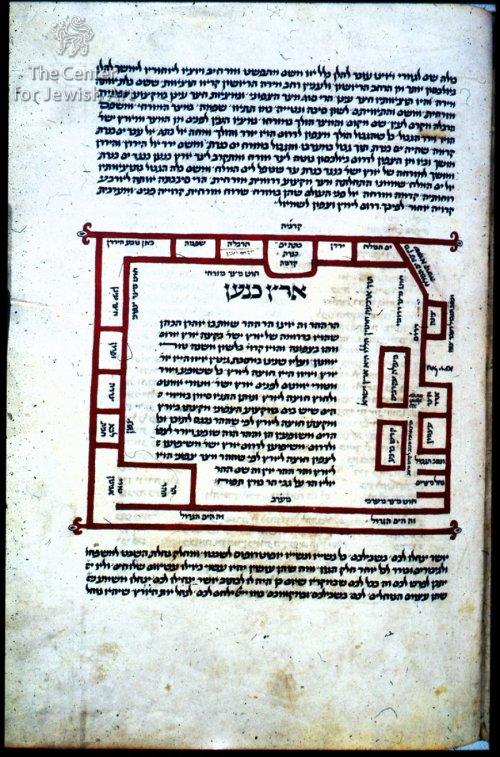 The first map (figs. 1a, b) is set in the centre of the right text column near the word כזה (thus), illustrating Rashi's commentary (I:139-139v – figs. 1a, b). The four cardinal points (except for south) are inscribed outside the map. To the west is theGreatSea, to the east are the River Jordan, the Dead Sea and the countries ofEdom,Moab, the plains ofMoaband Sihon, and to the south is the River Nile andEgypt. Below them is an inverted inscription of Jephthah's answer to the King of Ammon (Judg. 11:12, 18), succinctly describing the Israelites' route when they came up from Egypt: "Then they went through the wilderness, and compassed the land of Edom, and the land of Moab, and came by the east side of the Land of Moab". Indeed, the diagram illustrates this route.

The second of the two maps (figs. 2a, b) is a larger rectangle set in the centre of a wide text column, illustrating Rashi's commentary (I:139v-140). East is at the top, and the

Contribute a better translation centre of the rectangle denotes theLand of Canaan. The eastern border includes the River Jordan, the Sea of Galilee and theDead Sea as well as Shepham and Riblah. In the west is theGreatSea. In the north-west: "…from the Great Sea ye shall point out for you Mount Hor" (Num. 34:7), identified in the map as Turei Amnon (BT Gittin 8a). The northern border is defined by Hazar-enan, Ziphron, Zedad and the entrance to Hamath (Num. 34:8-12). The southern border include: the River Nile, Kadesh-barnea, the ascent of Akrabbim, Azmon, Hazar-addar and Zin (Num. 34:3-5). The paragraph in the centre discusses the situation ofMountHor, called Turei Amnon, in the north-west (cf. Rashi on Gittin 8a), which is not identical with the burial site of Aaron situated in the south, nearEdom.

Various copies of Rashi's commentary on the Bible include maps illustrating the texts of Numbers 34 and Judges 21, as well as Ezekiel 41 and 48. Scholars ascribe these maps to Rashi (Shneor 2009, pp. 371-374; Kedar 2009). Indeed, the maps of the Land of Canaan are found in the Leipzig manuscript of about the same time as our Rashi (figs. 3a-b, 4a).

It was copied by the scribe Makhir (מכיר בר קרשביא) from an exemplar written by R. Shema'ya, Rashi's pupil (Ofer 2007,pp. 435-443). Both maps in the Leipzig manuscript are similarly oriented to ours.and its boundaries Leipzig Rashi's Commentary on the Bible Franconia (?), second quarter of the 13th century Leipzig, University Liberary B.H.1, fol. 161 (Ofer 2007, fig. 1).

In another Rashi copy of the 13th century in Paris (fig. 5), the map of the boundaries of Canaan is oriented to the east as in the Leipzig and Munich manuscripts. However, the enclosed paragraph is written upside down. Makhir, the scribe of the Leipzig manuscript states at the bottom of his map (fig. 4a) that "in order to avoid turning the book I wrote it this way", i.e. the right way up. This suggests that a map with an inverted paragraph in the centre reflects Rashi's original (Shneor 2009, pp. 377-381). Fig. 5: Rashi's Map of the Land of Canaan and its boundaries Franconia, before 1250 Paris Rashi's Commentary on the Bible Paris, BnF hébr. 155, fol. 170v (Ofer 2007, fig. 2).