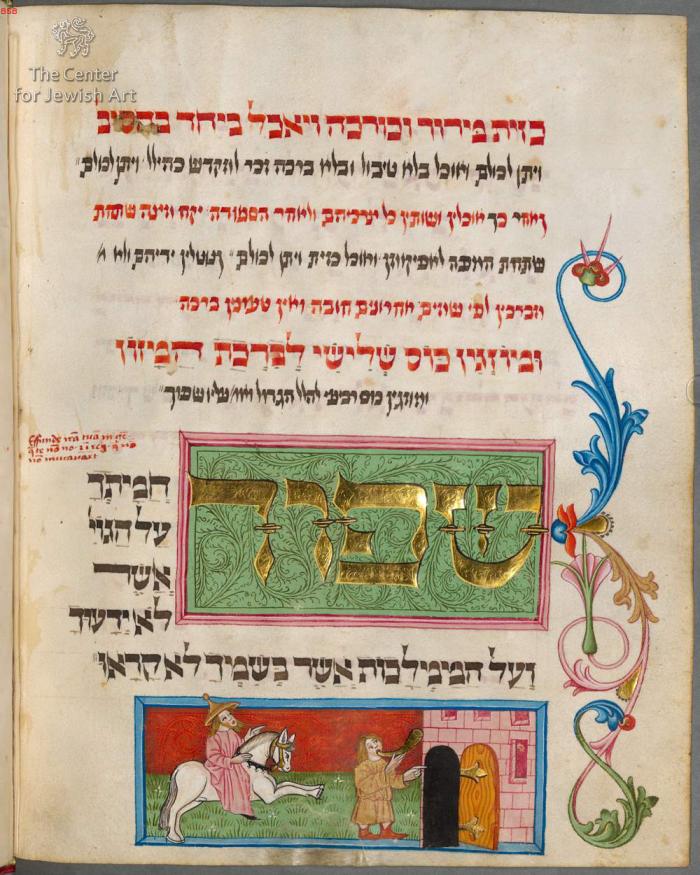 Fol. 24v: The page is decorated with two panels. The upper panel frames the initial word "Pour out Thy wrath" (שפוך) within the text column. The word is written in large gold letters on a green ground decorated with feathery scrolls in green ink. From the right of the magenta double frame two acanthus scrolls extend along the outer margin to the bottom of the page.

The panel in the lower margin depicts Elijah blowing a horn to announce the entry of the Messiah intoJerusalem. Behind him the Messiah is riding a white horse; both are approaching the open gate ofJerusalemand pointing towards it. Elijah, shown as a youth wearing a yellow ochre tunic and red shoes, is blowing a gold horn. The Messiah has a long brown beard and hair, and wears a yellow ochre pointed Jewish hat and a magenta robe. His horse has a gold bridle.Jerusalemis symbolised as an open gate with gold hinges in the lower part of a magenta tower.

A Latin annotation by Erhard is written in red cursive script:

The scene depicting the Messiah enteringJerusalemappears in several Ashkenazi and Italo-Ashkenazi haggadot from not earlier than 15th century. In the Tegernsee Haggadah Elijah, the harbinger of the Messiah, is blowing a horn (fig. 1; Gutmann 1967/68, p. 175), illustrating the event which follows the great wars of Gog and Magog at the end of time, when God will pour his wrath out upon the nations who do not know him, but will save Israel and re-establish the Temple (Narkiss 1991, p. 76; Sabar 1997/98, p. 298). The appearance of Elijah in this scene relates to the custom of opening the door to Elijah at the end of the Seder meal and offering him a special cup of wine (fig. 2) while holding the fourth cup of wine (Narkiss 1991, p. 77; Gutmann 1967/68, pp. 173-75; Gutmann 1974, pp. 29-38). In other haggadot the figure riding a horse or an ass sometimes conflates the attributes of the Messiah and of his harbinger by blowing the horn (figs. 2, 3), or being crowned and is accompanied by four figures, each with a banderole inscribed with a prophecy relating to the coming of the Messiah (fig. 3), while in the lower margin the dead rise from their tombs (Narkiss 1991, pp. 78-79 and n. 196). An outstanding illustration is in the Washington Haggadah (fig. 4) of 1478 fromGermany, where behind Elijah on the donkey sit the father and son, the mother and daughter, while the small figure of the servant hangs from the tail.