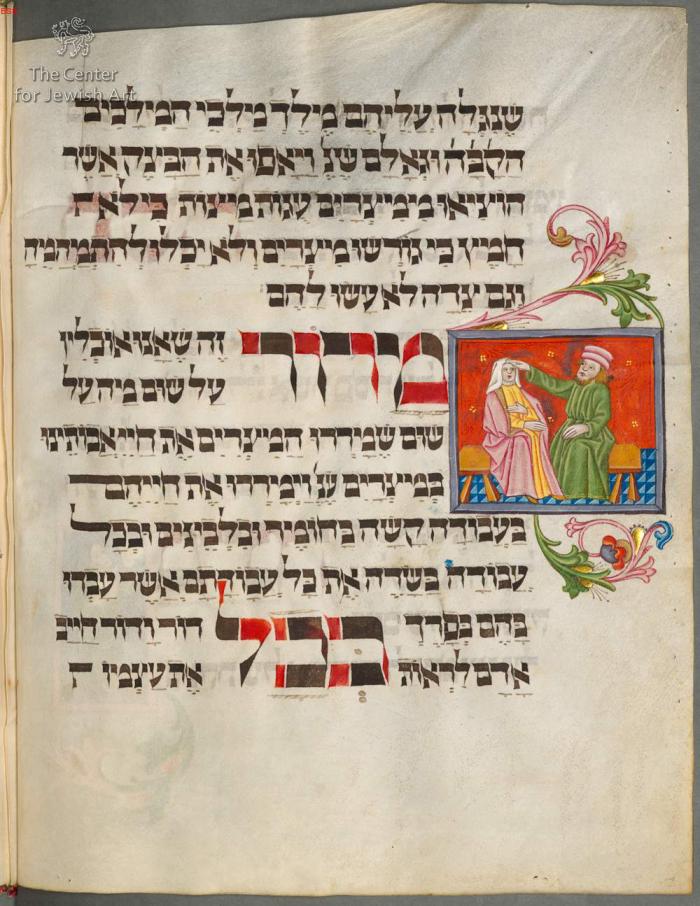 Fol. 21v: A panel at the right of the text column and in the outer margin illustrates the text of "maror" (bitter herbs). A man is pointing with his right index finger at his wife, seated next to him on the same bench. The woman is wearing a yellow robe and a magenta mantle with gold powder lining; her hair is covered with a wimple reaching to her shoulders. The man wears a green robe and a two-tiered magenta hat. The floor has alternating dark and light blue tiles and a red wall decorated with feathery scrolls in red ink with yellow dots.

Acanthus leaves extend from the top and bottom of the panel into the outer margin.

Fig. 3: Man pointing at his wife

Man pointing at his wife

Man and wife pointing at each other

South Germanysecond half of the 15th century

The illustration for "maror" (bitter herb), which is held up while reciting "This bitter herb …" is usually found in Sephardi and Ashkenazi haggadot of all periods. In both traditions the display of the maror is depicted similarly to that of the mazzah (see fol. 21): in the Ashkenazi haggadot it is usually held up by a man shown in the margin (fig. 1), whereas in the Sephardi haggadot it is a large ornamental plant in the centre of the page (fig. 2). In the Tegernsee Haggadah (fig. 3) the artist was satisfied with indicating the wife as a bitter herb, omitting a plant.

This gesture, which also appears in other haggadot (figs. 4-6), refers to the embittered relations between man and wife, alluding to Eccles. 7:26: "and I find more bitter than death the woman" (Narkiss 1991, pp. 73-74). This iconography appears as early as the 14th century in Sephardi and Provençal haggadot (fig. 4, and Sassoon Haggadah, fol. 114), and in 15th-century Italian and Ashkenazi haggadot (fig. 5; Rothschild Miscellany, fol. 160 and Second Darmstadt Haggadah, fol. 12). In the Hileq and Bileq Haggadah (fig. 6) the couple is inscribed, on the right above the man: "Says the picture: (when saying) 'this bitter herb' let me raise my voice. (Indeed), both this (lettuce) and this (wife) are the cause (of this bitterness)". The wife on the left is pointing back at her husband. On the left above her is inscribed: "The woman's answer: 'I thought you (yourself) were one of the (causes of bitterness)'. Then a third (man) comes and makes a stench between them" (Narkiss and Sed-Rajna, IJA 1978/1).