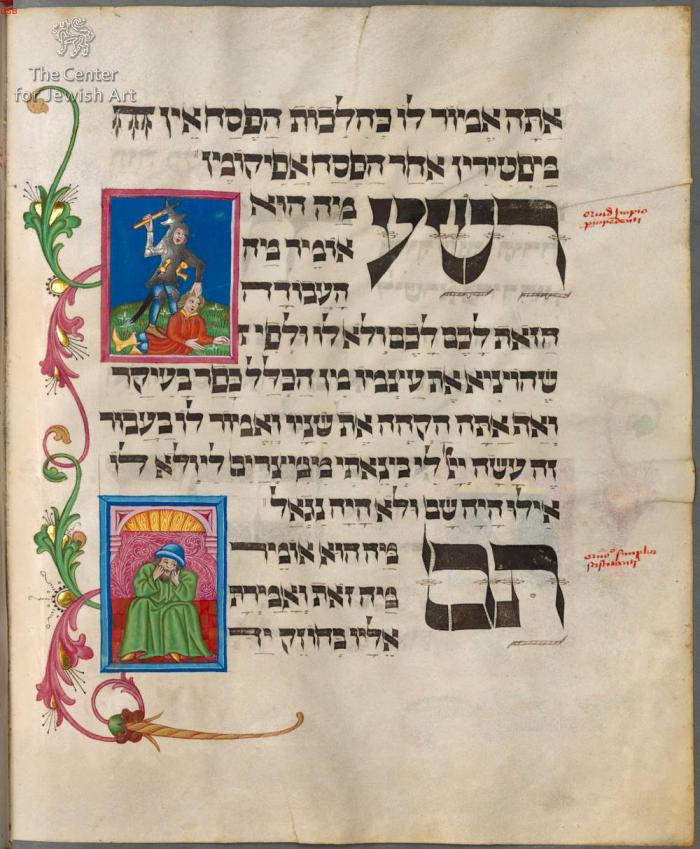 Fol. 12v: Two panels, illustrating the Wicked Son and the Simple Son, are set within the text space to the left of the text they illustrate.

In the upper panel, framed in magenta, the Wicked Son is depicted as a soldier about to decapitate a young man lying on the ground. The soldier wears a silver helm, half-armour and knee-cops, a dagger and a sword hanging from his waist. His right foot is placed on the prostrate man, and his left hand is pulling back his head, preparatory to decapitating him with a halberd held in his right hand. The scene is set in a green flowery meadow under a dark blue sky.

In the lower panel, the Simple Son is depicted as a bearded man seated within a vaulted room, his elbows on his knees, his head in his hands, looking askance. He wears a green robe and a blue hat. The magenta background of the room is decorated with white feathery scrolls; the floor is of red tiles and the ceiling of yellow and brown boards.

Fleshy magenta and green acanthus stems decorated with gold buds extend from the left of both panels along the inner and lower margins.

Latin annotations by Erhard are written in red cursive script:

What to answer an impious man who deprecates

How to answer a simpleton who always inquires.

In Ashkenazi and Italo-Ashkenazi haggadot of the 15th century, the Wicked Son who asks "What does this ritual mean to you?" (Ex. 12:26) is usually depicted as either an armed soldier or a fashionably dressed figure (fig. 2; Kogman-Appel 1993, p. 162). In our haggadah the Wicked Son "excludes himself from his people" (הוציא את עצמו מן הכלל) by demonstrating his wickedness to his victim. Such a scene is found in the Barcelona Haggadah (fig. 3), and in haggadot associated with Joel ben Simon such as the London Ashkenazi Haggadah of c.1460 (fig. 4) from Augsburg (?) or the Murphy Haggadah of about 1455 fromNorth Italy(Gutmann 1970, pp.76-95). In all these cases, as in the Tegernsee Haggadah, the Wicked Son is ready to kill his victim with a halberd, spear or sword.

The illustration in the lower panel of the Simple Son who asks "What is all this?" in different Ashkenazi haggadot from the 15th century depicts a young man sitting or standing. He supports his face with one or both hands (figs. 5, 6, 7) or points to the text (fig. 8).