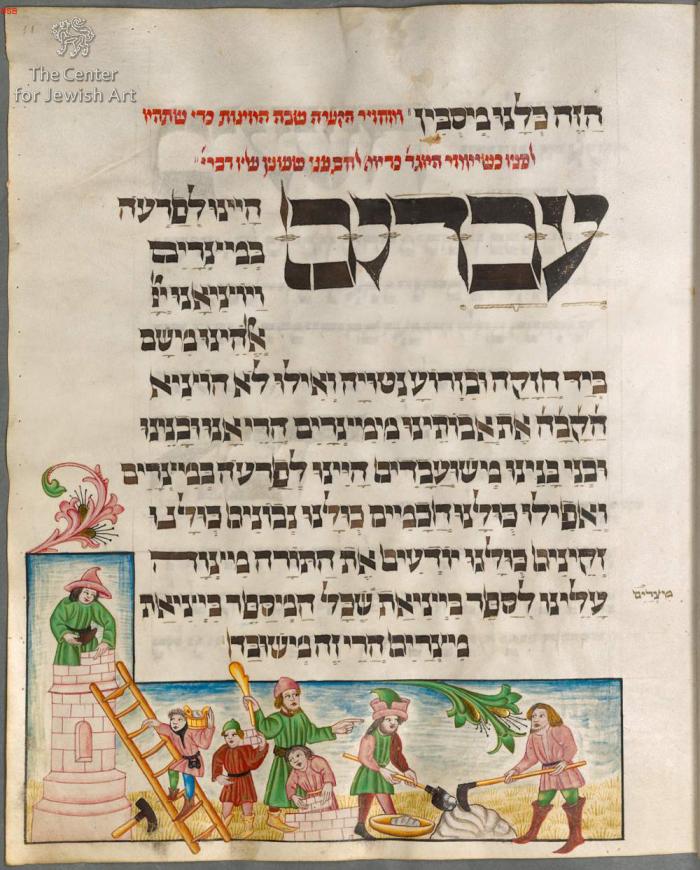 Fol. 11: A rectangular panel along the lower margin of the page and extending up the outer margin depicts the hard labour of the Israelites. The composition is divided into three groups. On the right, two bearded men facing each other are preparing the mortar, shown as a white heap between them. The man on the left is preparing blocks of mortar, one lying in a bowl at his feet. At the centre of the panel, a young man is building a brick wall, while behind him an Egyptian taskmaster holding a club is supervising the work. On the left a group of three men are engaged in building a tower: a young man is carrying bricks on his shoulder; another, with a pail of mortar, is climbing a ladder leaning against a tower, at the top of which stands the builder. He is holding a trowel in his right hand and adjusting the bricks with his left. The panel is framed by a black ink line, with an acanthus stem issuing from the top, and another descends into the panel near the figure on the right.

The illustration to "We were bondmen" (עבדים היינו) is found in most Ashkenazi and Italo-Ashkenazi haggadot. It usually depicts the erection of the two cities, Pithom and Raamses, mentioned in the text of the haggadah (figs. 2, 5 the cities identified, and 4). In other cases, such as theBarcelonaand Tegernsee Haggadot (figs. 1, 3), the Israelites are building a tower, which might be either city. The iconography of this scene frequently includes Israelites mixing mortar, climbing a ladder and placing the bricks at the top of the tower or wall. An early version appears in the Bird's Head Haggadah of c.1300 fromFranconia(fig. 5). An interesting detail in our haggadah, which also appears in others, is the figure of an Egyptian taskmaster, who is taller than the others and holds a club or whip (figs. 1-4). This detail may derive from the full story of the labour inEgypt(Ex. 5:13).