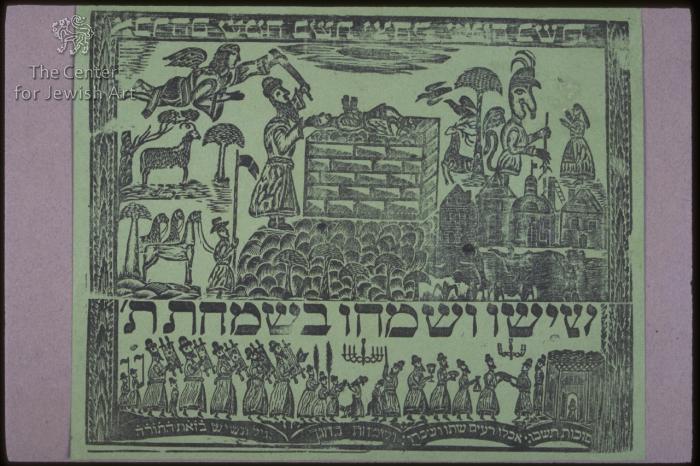 The rectangular Simhat Torah flag is divided into two unequal horizontal sections. The Sacrifice of Isaac is depicted in the upper, wider section, above a scene of Sukkot and Simhat Torah in the lower part.

At the center of the flag, Isaac, whose hands and legs are tied, lies on his back on a rectangular brick altar, located at the top of Mount Moriah. Abraham, who stands to the left of the altar, wears a Hassidic coat and shtreimel and has a long beard. He holds Isaac by his hair while lifting a butcher’s knife in his left hand. A clothed and winged angel flies up to Abraham from behind and touches the knife, stopping him from slaying Isaac. A ram stands between two trees to the left of Abraham, below the angel. Below it, at the foot of Mount Moriah, stands a servant who holds a long flagpole in his right hand. Three camels stand behind him and he holds the rope of the first camel in his left hand.

To the right of the scene is a depiction of the devil with Sarah, high above the roof-tops of a city.

A large figure of the devil stands at the center of this scene. He has two curved horns, wings, a tail and a long curved nose terminating in a large wart, and holds a stick in his hands. He stands with his back to Mount Moriah, facing the small figure of Sarah who raises her hands up in the air. To the left of the devil is a tree. Two birds fly from the tree towards Isaac’s altar and a deer runs beneath them, also towards the altar.

Below the buildings, there appears to be a river with the figures of Abraham and Isaac inside.

(These two scenes are based on Tanhuma Parashat ‘Va-yera’)

The top border of the flag bears a mirror inscription in square, filled letters which reads:

The lower section of the flag encloses successive scenes of people participating in the ceremonies of Sukkot and Simhat Torah. A Hebrew inscription is written above the scenes in large square letters as follows,

“Be happy and rejoice on Simhat Torah.”

Each scene is accompanied by an inscription on a wavey band below. From right to left the scenes are as follows:

The first scene show a sukkah with a figure standing at the entrance. The next shows two figures standing beneath a candelabrum, greeting a group of men who come with food and drink. After them, a group of men stand beneath a candelabrum, each man holding the four species. The last group includes five men in a procession, each holding a Torah scroll covered by a mantle. Behind them, walk two children each holding a Simhat Torah flag.

The inscription which runs beneath the scenes includes a brief sentence for each group as follows:

“You shall dwell in sukkot

Eat dance drink and get drunk

And you rejoiced in your festival