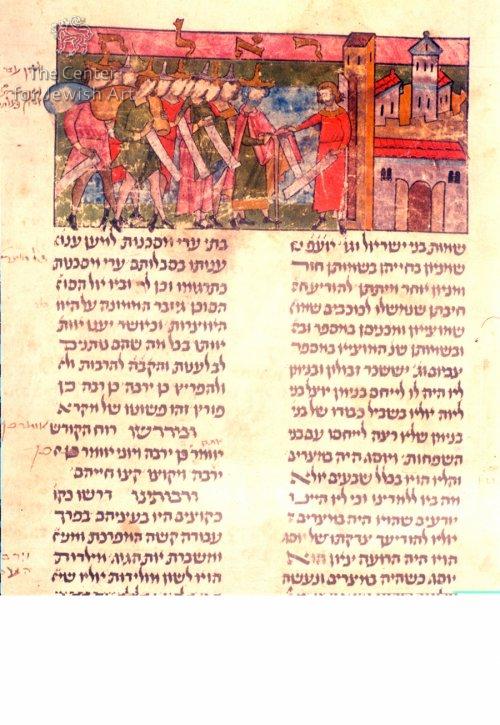 Vol. I, fol. 44v: The initial word Veelleh (ואלה, And these are) of the book of Exodus and Parashat Shmot (Ex. 1:1 - 6:1) is written above the illustrated panel in gold leaf on a magenta ground, across two text columns.

Joseph is standing at the tall yellow ochre gate ofGoshen, welcoming his old father, who is leaning on a stick, and ten brothers, two carrying sacks. Behind him is the townscape ofGosheninEgypt, shown as a complex of structures with a high tower, red-roofed buildings and a large edifice with biforae and an open gate.

Jacob, Joseph and all the brothers except two wear pointed Jewish hats, alternately laid with gold. Jacob and two of his sons each wear a long tunic and a two-coloured mantle in magenta and light brown, green and blue. The other sons are dressed in short tunics coloured magenta, red and green. Joseph, wearing a long red garment with a gold collar and cuffs is extending his right hand towards his father. Joseph, Jacob and four brothers are holding blank scrolls.

The composition of our panel (fig. 1) is similar to the scenes of the Children of Israel leaving Egypt or crossing the Red Sea in later south German illustrated manuscripts; see for example the World Chronicle of Rudolf von Ems of c.1300 from Zurich, especially the Exodus scene in the St. Gall copy (fig. 2). Another contemporary example is the Munich Chronicle from the Danube region, showing Moses and the Israelites (fig. 3).

Although Joseph is standing, there is a close affinity in composition between our panel (fig. 1) and those illustrating Joseph and his brothers in Egypt (fol. I:39 – fig. 6) and the Israelites before Moses (fol. I:63a – fig. 7). This suggests three variations of a compositional formula, where the dress, posture and gestures of figures standing in a row in front of an authority are similarly rendered.