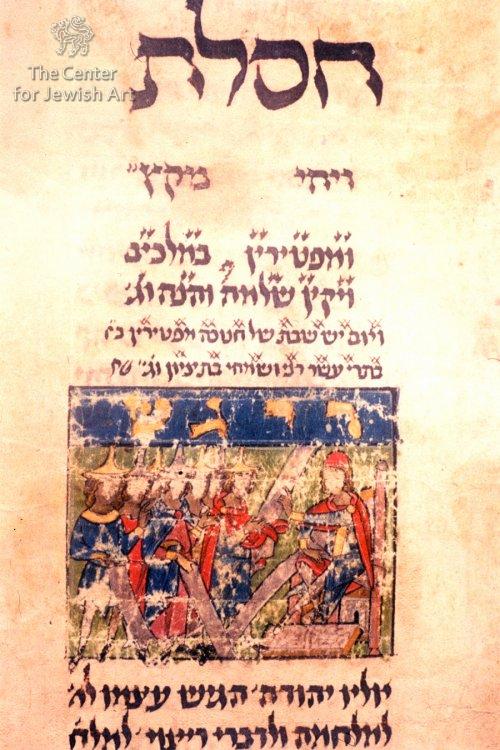 The panel depicts the second meeting inEgyptbetween Joseph and his brothers, including Benjamin (Gen. 44:18), on a green ground, illustrating the biblical text and the following commentary.

Joseph, on the right is seated cross-legged on a high magenta chair with a foot-stool. His left hand is pointing authoritatively and his right, holding a blank scroll, rests on his thigh. Seven brothers are standing before him, the first, fourth, and last holding scrolls. Joseph is wearing a blue garment with gold cuffs and fringe, a red chlamys and a red cap. The brothers all wear Jewish hats, alternately white and gold. The first and fourth brothers are wearing red and blue chlaymides over blue and magenta tunics respectively. Two others have red and blue short tunics. Three have gold cuffs, the farthest left also with a gold collar. Benjamin is standing at the end of the group on the left wearing a short tunic, as the youngest.

A barely visible plummet inscription by the later hand in Hebrew display script in the upper margin, above the panel: ויגש (Vayiggash).

The brother standing at the head of the group and talking to Joseph is undoubtedly Judah, who refused to surrender Benjamin to him (Then Judah came near to him, Gen. 44:18-34). The composition is similar to that of the Israelites before Moses (fig. 2).

In both scenes, a group of people with pointed Jewish hats face a dominant figure – Joseph or Moses - seated cross-legged on the right in three-quarter profile, one hand extended and the other resting on the thigh (see also I:44v).

The authoritative posture of a ruler appears for example in two other manuscripts executed in Würzburg: in the Evangelistary, written after 1250 (fig. 3), Augustus, one hand outstretched, is giving orders for the census; the other is the Psalter of 1260-65 (fig. 4), where in the upper panel of April in the calendar, the emperor is seated cross-legged with his right hand is in a gesture of speech.