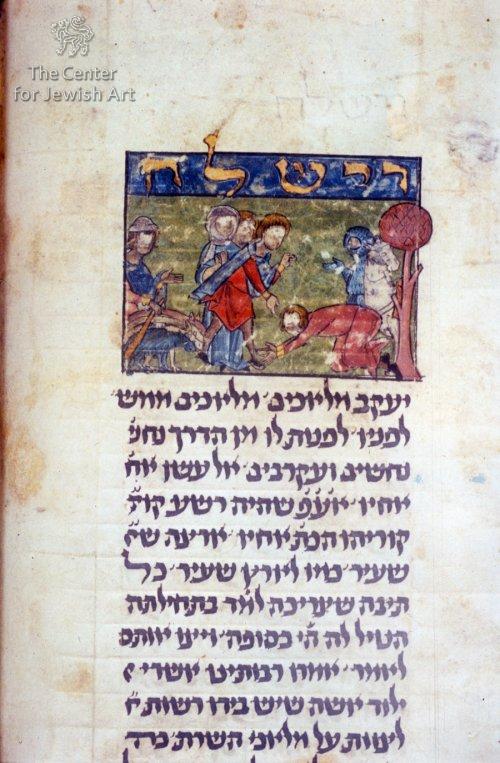 Vol. I, fol. 29v: The initial word Vayishlach (וישלח, And Jacob sent) of this parashah (Gen. 32:4-36:43) is written at the top of the illustrated panel in gold leaf on a deep blue ground, at the beginning of the third text column, below the explicit (חסלת ויצא יעקב) and its haftarah (ומפטרין בתרי עשר ויברח יעקב שדה ארם).

The panel depicts Jacob meeting Esau (Gen. 33:1-3) on a green ground, illustrating the commentary (I:29v). Next to a magenta tree on the right, Esau appears as a suppliant in front of Jacob, who is stretching out his right hand towards him. Behind Esau is a mounted soldier in armour; behind Jacob are a woman and a youth, followed by Jacob's herd of four quadrupeds and a herdsman with a club. Jacob wears a short red tunic and blue chlamys. The woman is wearing a blue dress and a white kerchief. Esau, the herdsman and the tree are coloured magenta, and the soldier's armour is blue. The horse, two quadrupeds and the faces are uncoloured, revealing facial features.

Inscriptions in plummet in Latin by the 13th-century hand, and in a later Hebrew square script:

The illustration depicts Esau, accompanied by a mounted soldier is bowing down in front of Jacob (fig. 1); whereas according to the Bible Jacob, scared of the meeting with Esau, "bowed himself to the ground seven times, until he came near to his brother" (Gen. 33:3). This depiction illustrates not the biblical but the commentary text (I:29v), which attributed to Jacob the following words: I [Jacob] advise you not to provoke me because despite yourself you shall not prevail against me but shall surely fall before me. The phrase "you will surely fall before me", etc. was borrowed from the Book of Esther (6:13), where the fall of Haman before Mordechai is similarly described (Pirkei de-Rabbi Eliezr, ch. 50). This expression does not belong to Rashi's commentary but is apparently a somewhat later interpolation, copied, however by our scribe Shlomo (Mack 2000). The usual visual representation of the meeting of the two brothers is in keeping with scripture, for example Jacob bowing before Esau in the Anglo-Saxon Aelfric Paraphrase of the 11th century (fig. 2). 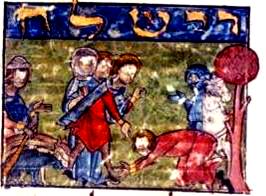 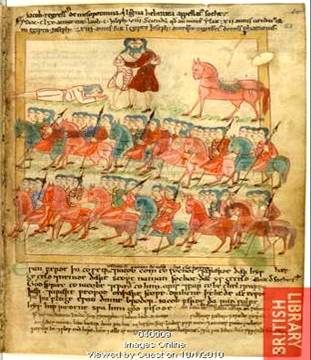 The upper register shows two scenes: Esau, in front of his horse, is embracing Jacob, who in the previous scene on the left lies prostrate in front of him. The lower registers depict the mighty army on horseback which accompanied Esau. In our illustration just one mounted soldier accompanies Esau. Esau's proskynesis is comparable to the similar gesture found in the Octateuchs, e.g. 11th-century scenes of Abraham in front of God, or in front of the three angels (e.g. Biblioteca Apostolica Vaticana, Vat.gr. 747 fols.38v, 39; Weitzmann and Bernabò 1999, figs. 249, 257). The depiction in our manuscript, which illustrates the commentary, is probably a unique representation of the meeting between the two brothers, which differs from the biblical text.