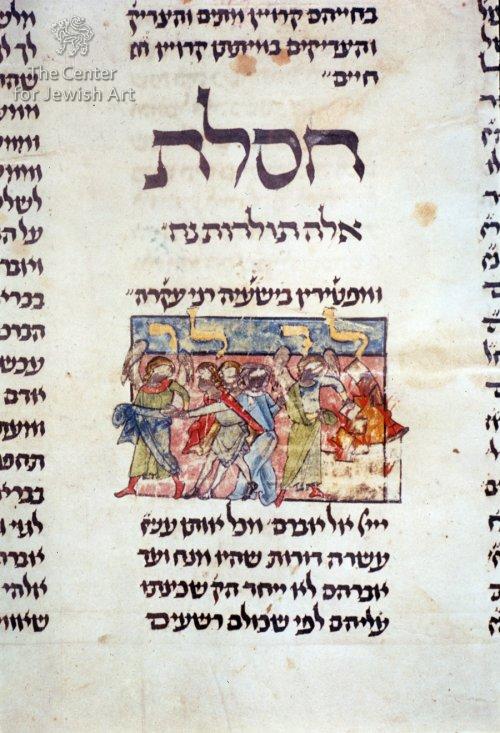 Vol. I, fol. 9v: the title Lekh-Lecha (לך לך, Get thee out) of this parashah (Gen. 12:1-17:27) is written above the illustration in gold leaf on a blue ground below the explicit (חסלת אלה תולדות נח) and its haftarah (ומפטירין בישעיה רני עקרה).

The panel is a conflation of two scenes depicted on a magenta ground, illustrating the biblical text and the commentary (Gen. 12:5; I:9v), as well as the text of the following parashah and its commentary (Gen. 19:24; I:16), the destruction ofSodomon the right and Abraham leavingHaranon the left. On the right, the winged angel destroying a building by fire illustrates the destruction ofSodom(Gen. 19:24). He is wearing a blue tunic and a green pallium. On the left another winged angel is leading Abram, Sarai and Lot out ofHaran(Gen. 12:5). The angel is grasping Abram's hand pulling him to the left. Sarai is turning her head to the right and the head of the youthfulLotis seen behind them. Abram is dressed in a short greenish-blue tunic and a red and yellow chlamys;Lot's bare leg suggests he was similarly dressed. Sarai wears a long light blue garment with a kerchief round her head. The angel is wearing a green tunic with a red collar, and a blue pallium is draped round his waist and leg.

Hardly discernible plummet inscriptions in Latin by a 13th-century hand and by a later hand in Hebrew square script: