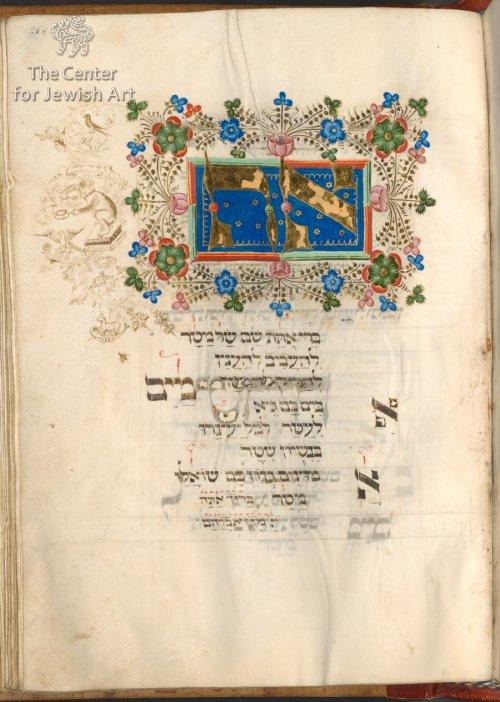 Vol. II, fol. 268: The initial word  אף (ברי אותת) (Af) opening the prayer of rain in the musaf service for Shemini Azeret  (Davidson, Thesaurus, א 7091) is written in gold display script in a rectangular panel on a blue background decorated with light blue feathery scrolls ending in gold flowers. The panel is framed by an undulating inner gold line and an outer green and red border.

Attached to the centre of each side of the border is a magenta cup-flower from which stem sprays of gold buds and coloured trefoils which spread symmetrically into the margins, including four corner rosettes and four smaller blue flowers.

To the left of the panel is a marginal pen-drawing in brown ink of a monkey surrounded by foliate decoration inhabited by various creatures: a monkey with a collar is standing on a platform, holding a saucepan in his left hand and smelling a spoon held in his right. This illustrates the punning word אף

(Af, nose) written in a banderole above, with the beginning of the prayer (אף ברי אותת). The monkey is surrounded by acanthus scrolls inhabited at the top by a parrot and a smiling human face in profile issuing from a flower; to the left of the platform is a bird with wings outspread. Below is a bearded satyr's face issuing from a flower, and underneath is a rabbit. To the right of the rabbit, on either side of the edge of the scroll, are two human faces in profile. At the very bottom, under the scrolls, a fly sits on a very thin tendril. 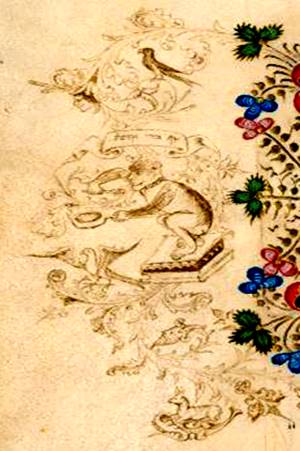