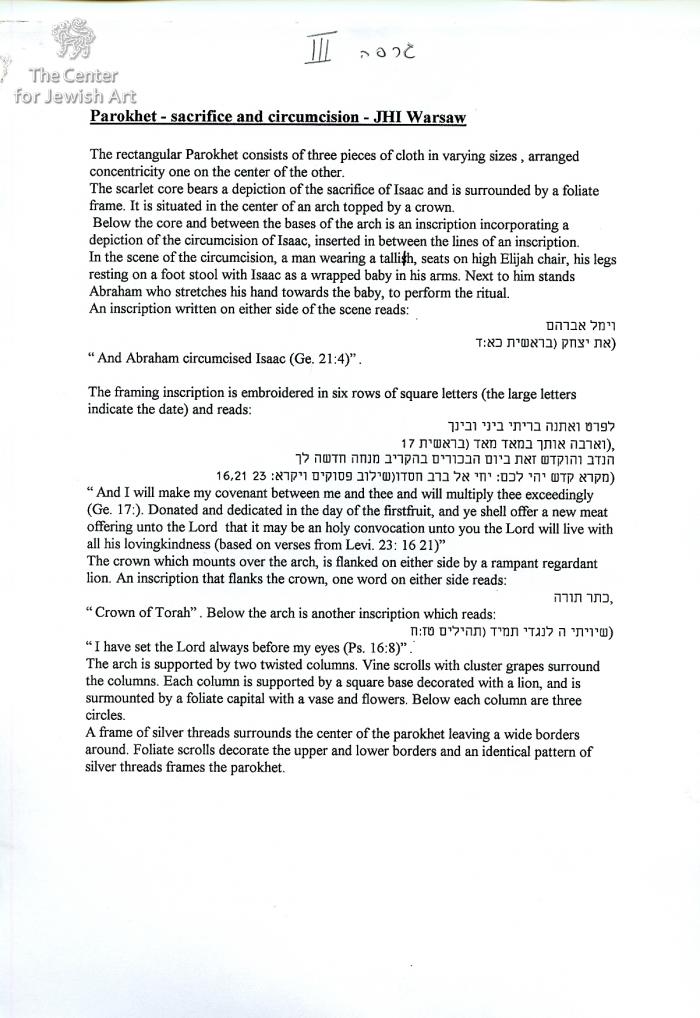 The rectangular parokhet consists of three pieces of cloth in varying sizes , arranged one on top of the other, the smallest piece at the center of the composition.

Below the central piece and between the bases of the columns  is a depiction of the circumcision of Isaac, inserted in between the lines of an inscription.

In the scene of the circumcision, a man wearing a tallit is seated on a high Elijah chair, his legs resting on a foot stool with Isaac as a baby wrapped in his arms. Abraham stands next to him stretching out his hand towards him,  in order to perform the ritual.

An inscription written on either side of the scene reads:

The framing inscription is embroidered in six rows of square letters (the large letters indicate the date) and reads:

“And I will make my covenant between me and thee and will multiply thee exceedingly “ (Gen. 17:2). “Donated and dedicated on the day of the first fruit, and ye shall offer a new meat offering unto the Lord  that it may be a holy convocation unto you the Lord will live with all his loving kindness “ (based on verses from Levi. 23: 16 - 21).

“Crown of Torah.”  Below the arch is another inscription which reads:

The arch is supported by two twisted columns. Scrolled vine with clusters of grapes surround the columns. Each column is supported by a square base decorated with a lion, and is surmounted by a foliate capital with a vase and flowers. Below each column are three circles.

The scene of the sacrifice of Isaac, incorporating Hebrew inscriptions, is depicted in the center of the parokhet, against a red background. Non of the figures have facial features.

Isaac, whose hands are tied, kneels on the fagots arranged in a rectangular lattice on the ground.  The fire for the altar burns in an amphora at the front of the scene.  Abraham who stands on the left behind Isaac, places his left hand on Isaac’s head, while lifting a sword in his right  hand.  Above their heads is the following inscription:

“The Sacrifice of Isaac.”

A brick altar with an arched opening is located on the right  in front of a small tree.

Above and below the altar  is inscribed:

A clothed and winged angel appears from behind a rounded cloud on the right upper corner. He points towards a tall tree to the left of Abraham, in which the ram is caught. Above the angel is inscribed :

The ram is seen on the left at the bottom of the tree with its front legs in the air. Next to it is an inscription: “Ram (caught) by its horns .”  Above the tree is inscribed: “Tree of life.”