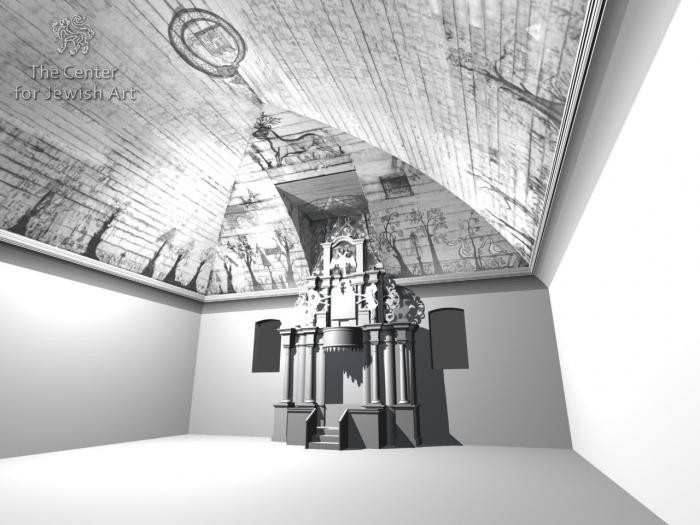 The Torah ark occupied the center of the southeastern wall. This three-tiered wooden construction was carved and painted by an anonymous Jewish craftsman (Lemchenas, “Pakruojo medinė sinagoga,” p. 101). Four steps led from the floor to the landing in front of the ark, flanked by panelled bars. On the first tier, two Composite columns carved with wine scrolls and separated by imitation marble panels stood on either side of the ark. The columns supported an entablature, which is inscribed with the verse כי מציון תצא תורה (for out of Zion shall go forth the law, Is. 2: 3). On the second tier, decorated with four Corinthian columns, two sculptured rampant griffons held the Tablets of the Law, surmounted by hands raised in priestly blessing. The entablature of this tier is inscribed אתכם על כנפי נשרים ואבא אתכם אלי ([I bare] you on eagles’ wings, and brought you unto myself, Ex. 19: 4). On the third tier, the Doric aedicula spanned with a Baroque pediment included the Russian two-headed imperial eagle with its insignia: sceptre, orb and crowns. Another, larger crown was attached to the pediment above the eagle. The ark was flanked with carved “ears.” The top tier of the ark occupied a niche cut in the cove dome.