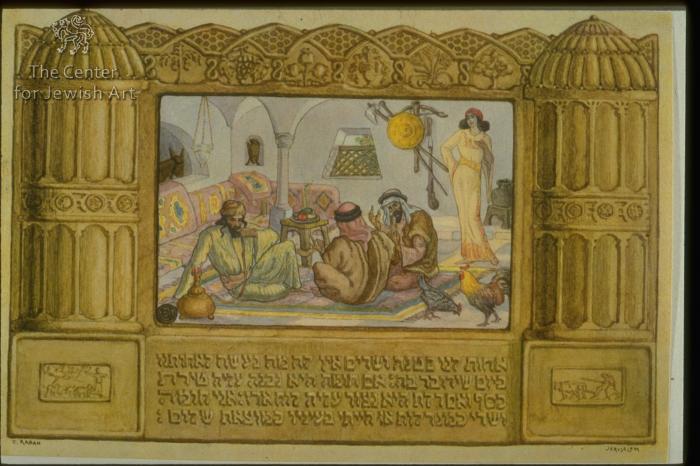 The picture illustrates Song of Solomon 8: 8-10. Three men, the brothers, are sitting on a carpet, in the centre of the room, discussing. The left, black-bearded man is smoking a narghileh. He is leaning against the floor with his right hand and is wearing a green-yellow striped robe. The man beside him, seen from the back, is wearing a brown robe and a crimson kaffia. At his right another black-bearded man is sitting. He is wearing a brown vest and on his robe and a white kaffia. He seems to be speaking to the man beside him. He is trying to express something in his hands while speaking. A girl in a yellow dress and a red head cover is standing behind him. Her right hand is on her hip, while the left one is on her chest. On the wall behind her are weapons and tools, aside a trapeze window. On the right foreground are two cocks. The picture frame represents a brownstone relief. On both sides of the the painted scene stands a protruding pillar with a vault. Between the pillars, above the picture, lays a stone beam. The beam has arches upon it and symbols depicted between them. Right to left: tree, wheat, flower vase, pomegranate and palm tree. Below the right pillar a relief is painted. It represents a man ploughing the earth with bulls. Below the left pillar a relief of a shepherd with his flock is depicted in the same technique. The text is written below the painted scene, between the pillars as if inscribed in the stone. It is in Hebrew block, brown letters.