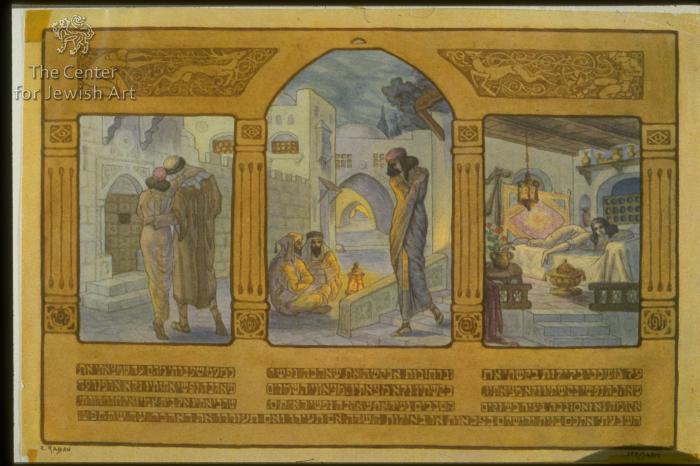 P. 17. The picture illustrates Song of Solomon 3:1-5. It is divided into three scenes. Below each scene is written the text its illustrating. The two first sections depict Shulamite. The third depicts Solomon and Shulamite. At the right scene a girl is lying on her bed in her room, which three stairs are leading to it. On her right there is a table that has a flower pot with red flowers on it. Opposite the table stands the girl's white bed. Behind the girl's bed there is a grid window. Below the picture Song of Solomon 3:1 is quoted. The middle section is arched at the top, unlike the other scenes. It represents a girl descending her house stairs, wrapped in a gray robe. Down the stairs tow men are seated on the ground, wrapped in their robes, in front of a lantern. The alley houses are seen at the background. That very same background continues through the third scene. Solomon and Shulamite are depicted in the third section (see MA.1050.22). Above the left scene a girl is depicted identically, so to show two lovers running towards each other. The scene is all brown monochrome. Among the scene are standing brown columns. At the bottom of each there is a medallion. On the medallions is written, in block Hebrew letters from right to left: "1936"(or "you will want") "Z. Raban", "Jerusalem" and an unrecognized word. תרצה