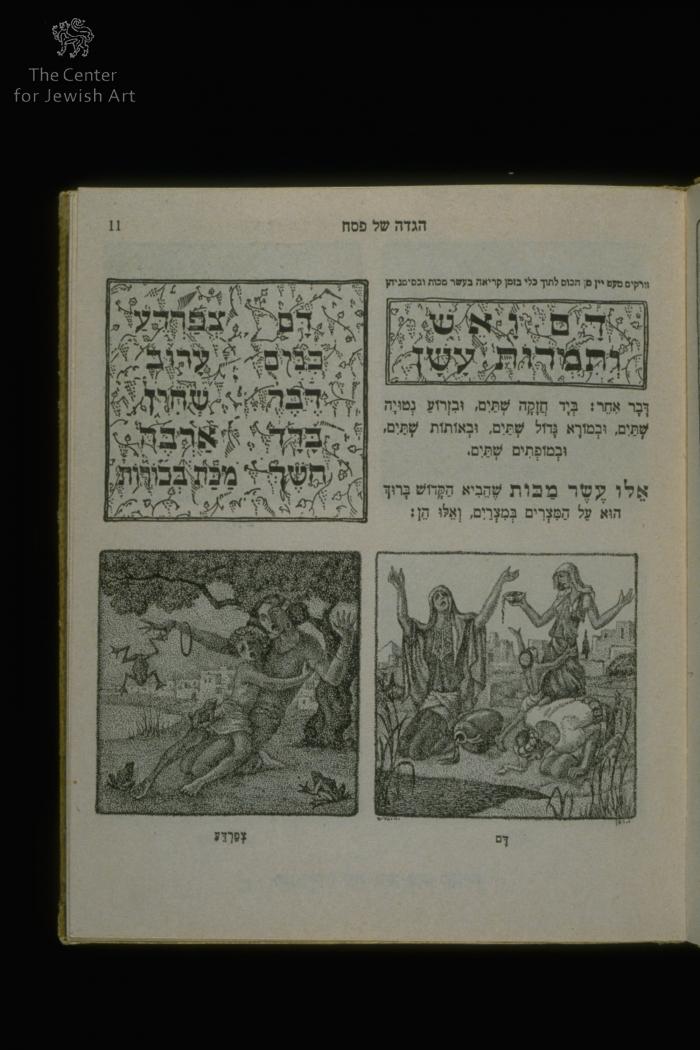 "דם ואש ותמרות עשן" "אלו עשר מכות שהביא הקדוש ברוך הוא על המצרים במצרים ואלו הן: דם צפרדע כנים ערוב דבר שחין ברד ארבה חשך מכת בכורות" p.11 includes four sections. At the upper right corner is written in Hebrew block letters on a vine framed decoration, in two columns: "Blood and fire And pillars of smoke" The printed text below the "Blood, fire..." begins with: "This indicates the Ten Blows, which the Holy One, blessed he be, brought upon the Egyptian in Egypt, to wit:" On the upper left corner of the page are written the Ten Plagues, in Hebrew block letters. They are written on a vine framed decoration in two columns and read from right to left and downwards: "Blood, Frogs, Lice, Beasts, Murrain, Boils, Hail, Locust, Darkness, Slaying of the first-born." At the bottom of the page are two pictures. The picture on the right represents the blood plague. The one on the left represents The plague of frogs (oc. 8484). The blood plague picture depicts two skinny, tall women kneeling and raising their hands to the sky. They both wear long dresses and shawls over their heads. The woman on the right has a bowl, from which blood is dripping in her right hand. A small child, seen from the back, is holding the woman's hip in his right hand and raising his left hand towards the bowl. He is wearing a girdle and a head cover. A man is bowing on the woman's right, perhaps vomiting. The man is wearing an oriental head cover and dress. Blood is dripping from a large jug to the woman's left. The whole scene takes place on the bank of a bloody river with weeds growing in and around it. The man is wearing a sharwall,a shirt and a tarbush. Below the picture, in Hebrew block letters is written "Blood". Buildings are seen at their background.