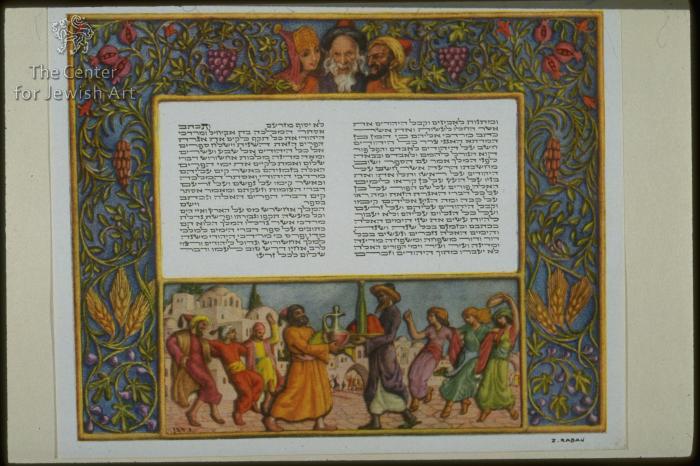 The picture below the text (Esther 9:22-32) illustrates the celebration of the Jews of Shushan. The top frame depicts the faces of tow men and a woman, and on the sides are the Seven Species. The picture below the text illustrates Esther 9:17: "... a day of feasting and gladness". The picture depicts Ahasuerus and Mordecai in a square, turning to each other. Ahasuerus, on the left, wearing a yellow robe, is carrying a jug on a tray and something else. Morecai, on the right, wearing a purple robe, is carrying a bottle on a tray . Three embraced girls are dancing in a line behind Mordecai and 3 embraced men are dancing in a line behind Ahasuerus. The city of Shu'shan is at the background. The top frame represents 3 faces: Esther, Mordecai and Ha'man or Ahasuerus, perhaps. The right face is of a black bearded man with a yellow-red head cover. The middle face is of a white bearded man and a blue-red head cover and the left one is of a crowed young woman, with a pink head cover. Around them and on both sides of the frame are pomegranates, vine, dates, wheat and fig intertwining with green leaves.