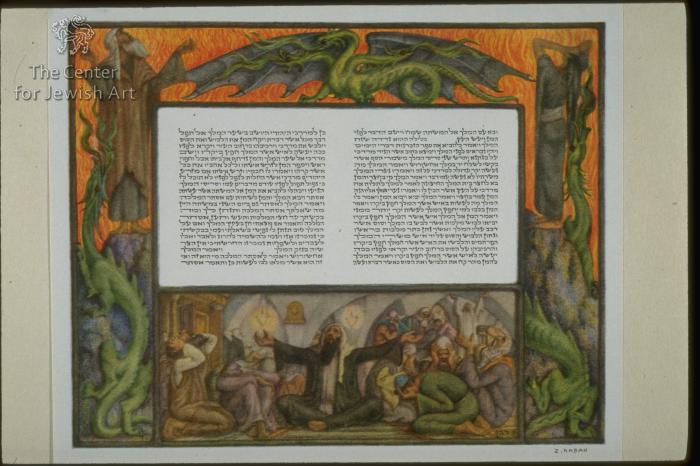 The picture below the centered text (Esther 5:14-7:6) illustrates Esther 4:1. The frame, on the other sides of the text depicts a man and a woman tortured by monsters. The picture below the text illustrates Esther 4:1 :"When Mordecai perceived all that was done, Mordecai... went out into the midst of the city, and cried in a loud and bitter cry". Mordecai, sitting at the center of the picture, on the ground in a black robe is spreading his arms forth and turning his head upwards, mourning. Around him, in the room, other men are mourning. Some are holding their head painfully. Other men are turning their head upwards, asking for mercy. The interior seems to be a vaulted synagogue. The top frame represents a winged, green three-headed dragon. He is turning one tongue to a woman, who is standing on a rock on the right side of the frame. A dragon, sitting at the bottom right frame, is twisting around the rock and turning its tongue to her. The upper dragon is turning 2 tongues to a white-bearded man, standing on a rock at the left side of the frame. A dragon is twisting along the man's rock as well. The dragon is touching the man's head with his tongue. The man and the woman are turning desperately upwards.