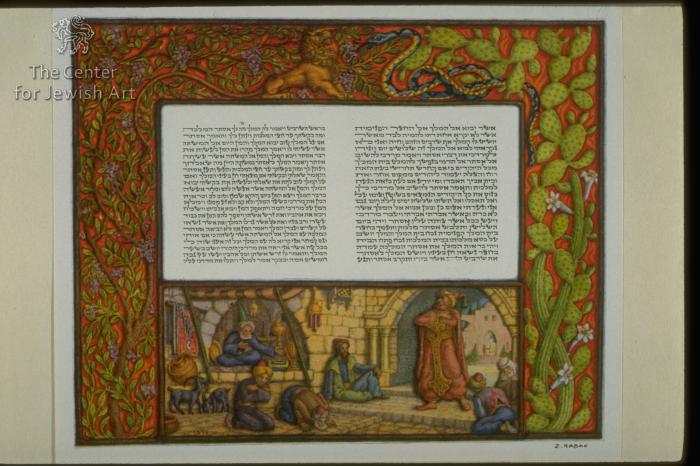 The picture below the Hebrew text (Esther 4:11-5:14) illustrates Esther 3:2. The symbolic is divided into two sections and is connected at the middle top. The picture below the text illustrates Esther 3:2 :"And all the king's servants, that were in the king's gate bowed and reverenced Ha'man: for the king had so commanded concerning him. But Mordecai bowed not, nor did him reverence". The picture depicts Ha'man, wearing fancy oriental clothes, inlaid with precious stones, standing with folded arms and a proud expression at the palace gate. Five people are bowing and revering him on the sides of the gate. A merchant is bowing in his niche with his goods around and tow kids down the shop. Mordecai is sitting loosely, leaning against the wall, wearing a red robe a green coat, looking straight away. The right side of the frame represents a green cactus plant with white blossom, on a red background. A snake is intertwining with the cactus, merging until the middle top, where the snake is threatening a roaring lion. The lion is standing at the end of the left side of the frame. Behind him a tree sprouts from the lower left corner. The lion and the tree represent Mordecai as a proud Jew (lion,Judea), with rich sources (Psalms 1:3). The snake and the cactus represent the cunning and the wickedness of Haman (D.P).