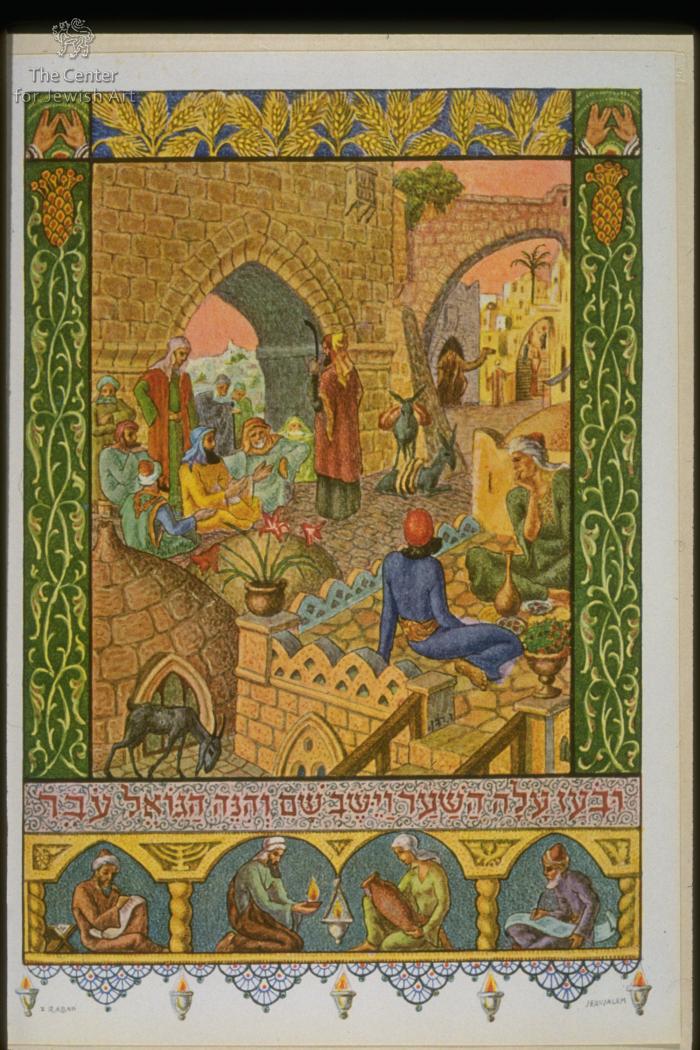 Seventh illustration. Boaz is depicted sitting in the gate of the city with eight notables of the town, while the kinsman, wearing a green-brown robe, is passing before them. Boaz, wearing a yellow robe, is sitting on the paved road. The kinsman is turning towards the gate, where Boaz is seated. Two donkeys are seen beside the gate. Opposite the gate, tow women, one in a blue dress and the other in a green one, are sitting in a porch, looking at them. At the background are the city houses, another gate and a camel. At the foreground a vaulted building depicted, with a kid at the entrance. The picture is framed by yellow barley on a blue background above and a green decoration at the sides. The upper corners depicts the priestly benediction gesture. Below the picture the text is written in block, red Hebrew letters on a pink background. It quotes part of the Story of Ruth 4:1: "ובעז עלה השער וישב שם והנה הגואל עבר" "Then went Boaz up to the gate and set him down there; And behold the kinsman of whom Boaz spake came by". Below the illustration 2 writers are seated in the side-arches. At the arched center a woman is turning a jug towards a lamp, that a man is lightening. The yellow arches are set upon a blue background. The right writer is wearing a purple robe, the left one is wearing an orange robe, the woman is dressed in green and the man is brown-green robed.