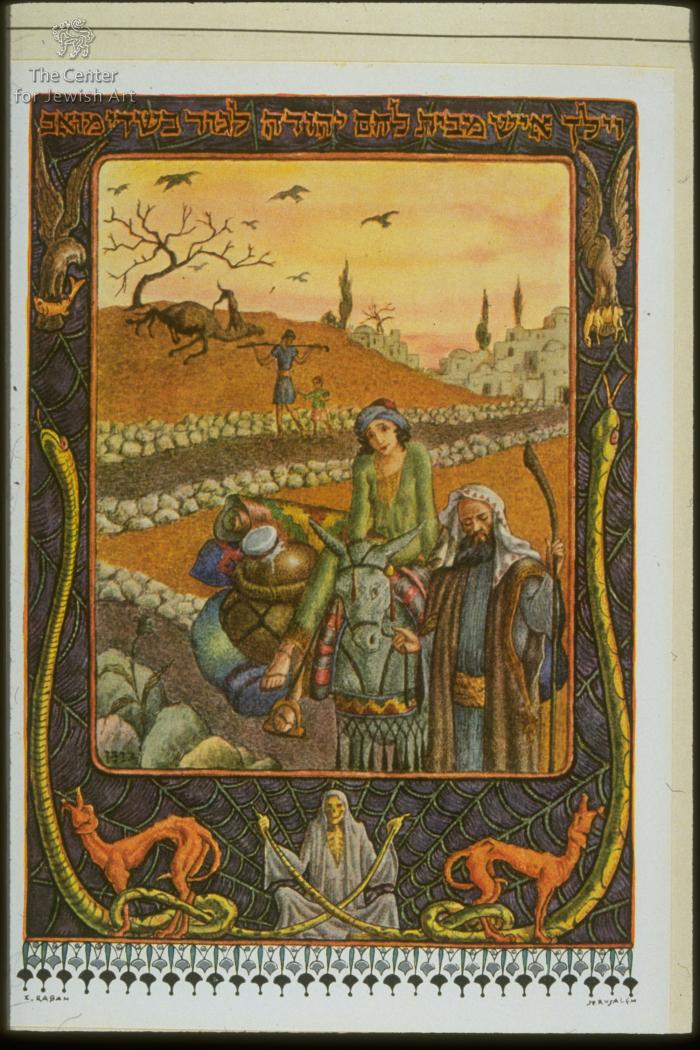 First illusration. The picture illustrates part of Ruth. 1:1. which is quoted the top of the frame in Hebrew block letters: "וילך איש מבית לחם יהודה לגור בשדי מואב" "And a certain man of Beth-lehem-judah went to sojourn in the country of Moab" The picture represents Naomi riding a donkey, led by Elimelech. Elimelech is wearing a gray robe and a belt, with a brown coat over and a white head cover, while holding a stick in his left hand. Naomi is sitting on the donkey while turning her legs to the left. She is wearing a green robe, sandals and a gray-reddish head cover. The donkey is loaded with packages,a blanket and a jug. They seem to be on the way. A city, probably Bethlehem they have left, is seen in the far background. Behind them is a hill with a bare tree and birds. A deer is lying (dead?) on the hill and a dog is standing beside him. Birds are flying in the sky. Down the hill a shepherd and a child are walking in a stone-marked path. A gowned skeleton is sitting at the frame bottom, holding the tails of two yellow green snakes. They are climbing along the sides of the frame. The left snake is turning leftwards, to a fish carried by an eagle; the right snake is turning rightwards, to a kid carried by an eagle. The dogs are barking towards the snakes. The frame background is purple with spider's web on it, coming from behind the skeleton.