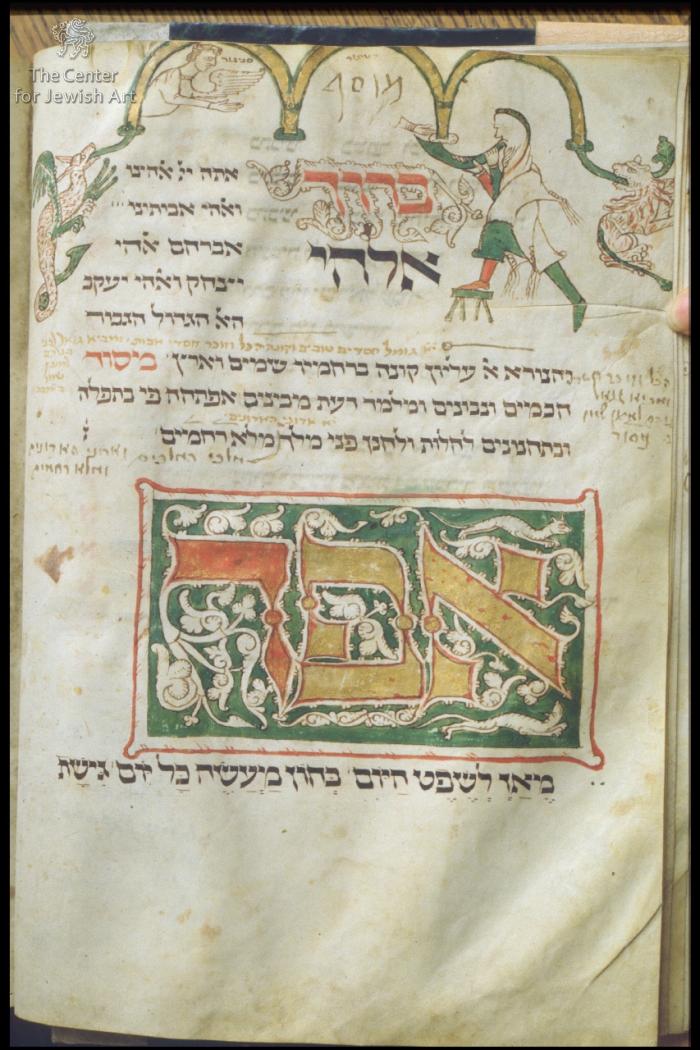 © Center for Jewish Art, Photographer: Unknown,
Fol. 20v: Opening page of the Musaf prayer for the first day of the New Year executed by artist A, including a text illustration at the top of the page and an initial word panel for the word “planned” (אפד ) on the bottom half of the page. The text illustration, executed in brown ink and green and red wash, is set adjacent to the small initial word "Blessed art thou” (ברוך), which is rubricated in red and surrounded by wriggly work extending in several places to form small foliate flourishes. The illustration depicts a bearded man standing with his left foot upon a four-legged stool whilst blowing a long green shofar. He stands underneath the right arch of the three arches of heaven, while the pointing hand of God emerges from the middle arch, almost touching the horn. An angel with one wing and one long hand extending outwards, emerges from the left arch accompanied to the right by the tiny inscription “defender” (סניגור). Under the middle arch are the remnants of another tiny inscription of the word “prosecutor”( קטיגור). The man is set in profile with minimal facial details and his head and most of his body are covered by a tallit (prayer shawl) underneath which is visible his green and red garment. The gold arches of heaven – which rest on small oval supports - are decorated on either side with green branches which are held in the mouths of two animals set in the margins – a lion on the right and a winged dragon on the left. The word Musaf is written under the middle arch, added by a later hand. The initial word panel is set in the lower half of the page, filling most of the width of the text space. The initial word “planned” (אפד ) is written on a green ground, the first two letters are painted in gold powder outlined in red and the last letter is painted in red with traces of gold powder mixed in. The letters are all surrounded by wriggly work in spared ground technique with many extended foliate flourishes filling most of the panel. Above and below the first letter, are two dogs in spared ground technique. The panel is surrounded by a red border.
Name/Title
Vienna High Holiday and Sukkot Mahzor | Unknown
Object
Mahzor
Object Detail
Fol. 20v
Settings
Unknown
Date
1300-1350?
Synagogue active dates
Reconstruction dates
Artist/ Maker
Unknown (Unknown)
Origin
Germany | Southern Germany
|
Historical Origin
Unknown
Community type
Ashkenazi
|
Congregation
Unknown
Location
Austria | Wien (Bundesland) | Wien (Vienna) | Österreichische Nationalbibliothek (ÖNB)
|
Site
Unknown
School/Style
Unknown|
Period
Unknown
Period Detail
Collection
Austria | Vienna | Österreichische Nationalbibliothek (ÖNB)
| Cod. Hebr. 174
Documentation / Research project
Unknown
Category
Hebrew Illuminated Manuscripts
Material/Technique
Pen, ink, watercolours and gold powder