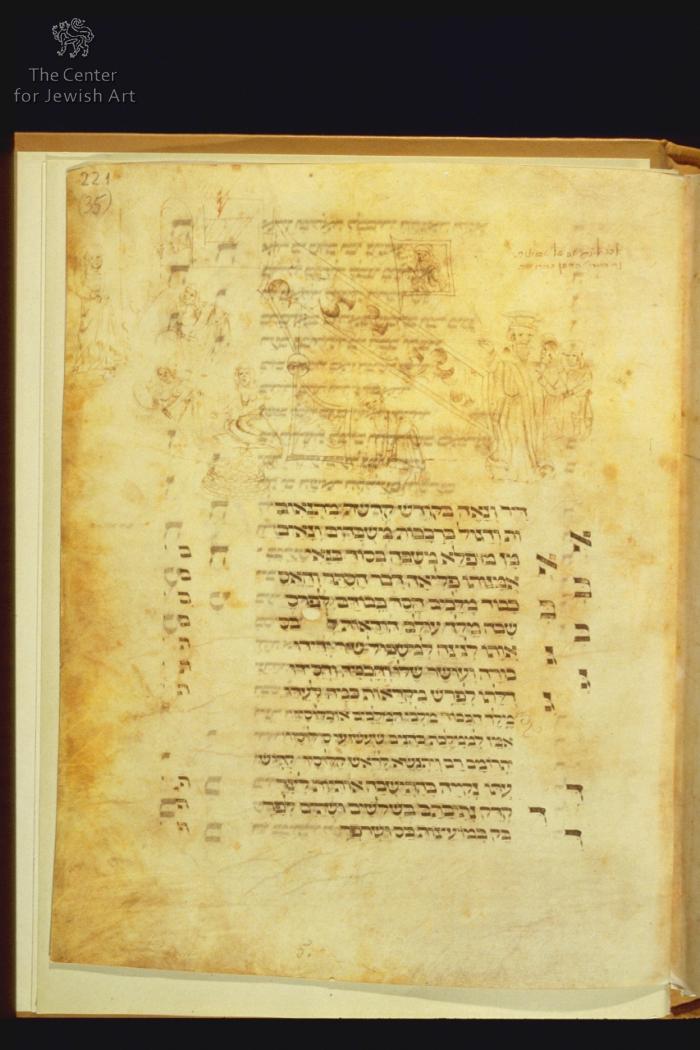 "In the fifteenth century, a further quire was added to the Worms Mahzor for the second day of Shavu'ot (fols. 221r-224r). On fol. 22lr, at the opening of the piyyut for the second day: אדיר ונאה בקדש (Davidson, I, p. 52, No. 1092), two scenes are depicted combined with the initial letter alef, in pen drawing in greenish ink. Part of the story of Ruth is represented around the initial letter. On the right the large figure of Boaz, richly dressed, is pointing with a stick towards a field where two women are reaping, a man is gathering sheaves, and a woman, probably Ruth, is collecting ears of corn into a large basket; two workmen, to Boaz' right, are pointing at Ruth, who was permitted to glean amongst the sheaves (Ruth ii: 15). At the upper left is the aged Naomi watching the scene with, to her right, a building with a large window, through which a hand emerges holding a shovel full of grain, perhaps alluding to the six measures of barley Boaz gave Ruth for Naomi (Ruth iii:15-17). The second scene is shown within the right arm of the alef. It consists of a half-figure of Moses holding two round-topped Tablets of the Covenant, which are inscribed with the beginnings of the sixth, eighth and ninth commandments (Ex. xx: 13-14). The other parts of the alef are decorated with inverted foliage scrolls, which were a popular motif for decorating letters from the middle of the fifteenth century on. This kind of decoration appeared in the second quarter of the fifteenth century, and had wide distribution, through model books such as the Gottingen and Berlin Model Books and the Guttenberg printed Bible of Mainz 1454. The illustration to Ruth, as well, was rendered in the style commonly found in popular texts of the fifteenth century, which were widespread through the use of wood-cut printing.111 Since the Mahzor was definitely in Worms by the middle of the century, it was probably drawn by a local artist."( Aliza Cohen-Mushlin, "Later Additions to the Worms Mahzor", p.94).