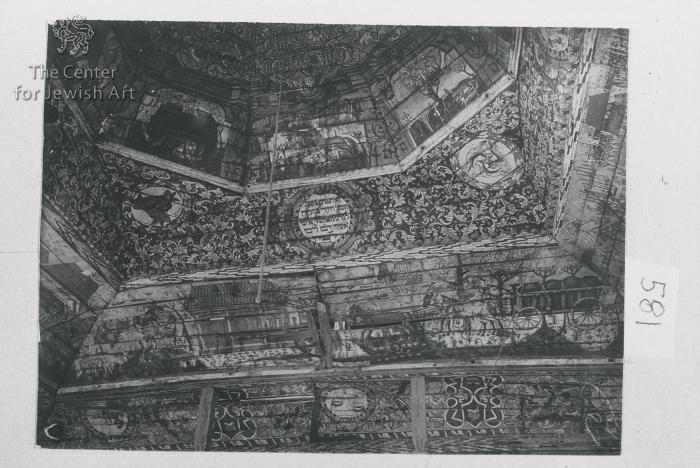 Southern part of the dome decoration.

The decoration of the octagonal dome consists of three concentric wide bands of painting (registers) filled by ornamental and symbolic motives.  A decorative floral rosette placed in the center of the dome. The band of vegetable plaiting with cups of flowers, animals and birds surrounded the central rosette.

Painted architectural cornice separates the vegetable plaiting from the broad band filled by eight medallions with symbolical images. The decoration of the upper level of the octagonal dome consist of: bear with chain in the nose, lion and lioness walking, hand removes the snake from the tree.

The square room with pendentives are depicted by eight round medallions with animals images and inscriptions. The medallions are placed inside floral ornament. There are depicts: three fish intertwined with each other, three hares running.

The inscription in the middle medallion:

The first step of curved vaulted construction which supported the dome are depicted by ted six assorted horses carries the cart with bags. The driver in broad-brimmed hat, depicted in silhouette, rules the horses. Large birds sit on a trees on the side of the road. The cart approaches the large wooden building under the high roof. Peacock with open tail, sits behind the building.

The second step of curved vaulted construction which supported the dome are decorated by zodiacs signs.