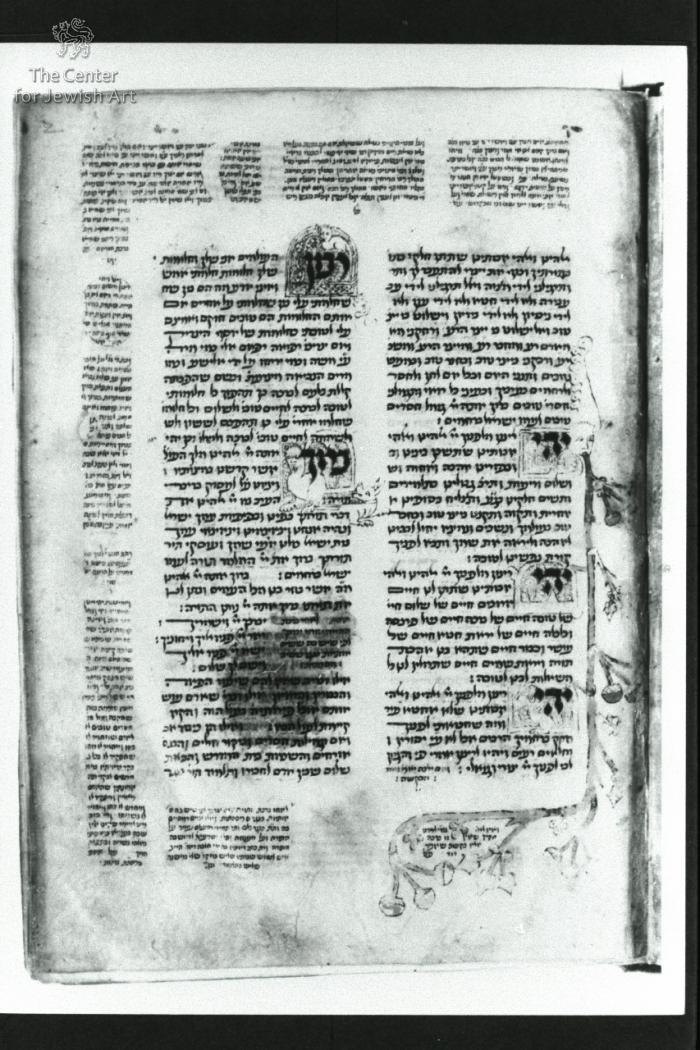 Fol. 2: Each one of the five initial words is written against a decorated panel. The first one, יהי is written within a double blue frame enclosing a pattern of different lobed leaves. On its right is a human head with an elongated lobed hat. A branch scroll with triple leaves and acorns is emerging from its mouth along the margin. The second initial word יהי is written within an double arched frame hanging on a small branch extending from the long scroll. It is enclosing a pattern of different lobed leaves. The third initial word יהי is written within an double arched frame hanging from a branch enclosing a pattern of leaves. A dragon with a long tail is sitting on the frame's base, drawn in spared ground techinque with blue contours. The fourth initial word רבון is written within a double arched frame against a red criss-crossed background combined with lobed leaves. Under it is a triple braid. On top of it is a seated grotesque, a scroll with tripple leaves and acorns emerging from its mouth. Both, the braide and the grotesque are drawn in spared ground technique with blue contours. The fifth initial word ברוך is written within a panel, its right side shaped as a double arch, enclosing the word. To its left is a bearded grotesque. A dog is seated by its lower right corner. The panel is filled with a pattern of criss-crossed lines and leaves. Most of the initial words for the different paragraphs within the page are written within a double arched blue frame, against a red backgrouned with a criss-crossed or leaves pattern. Sometimes a grotesque in blue contours (in spared ground technique) is combined with the background. More rarely it has a tail shaped as a scroll or a scroll emerging from its mouth between the columns or into the margins. (see also e.g. fols. 2v, 3, 4, 4v, 5, 5v, 6, 7, 8, 9-10, 12v-14, 15v, 16v-18, 19v-21v...)