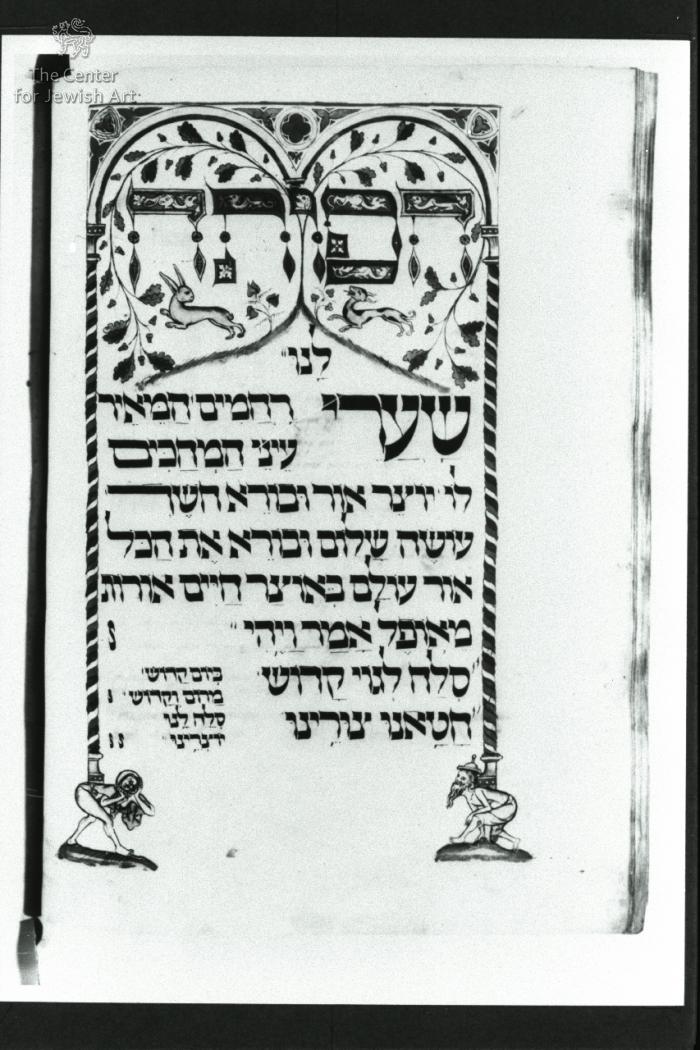 Fol.  107v: The entire page is framed by an arch anclosing the text and the decorated initial word (הפותח (לנו שערי רחמים. The arch is composed of two narrow twisted columns in red blue and yellow with bases and capitals. Resting on the capitals is a blue and yellow double arch each of its two outer arms? are filled with framed red trefoil flanked the two elongated red trefoil. The central ? is filled with a red framed quatrofoil flanked by two green elongated trefoils. Within the arch is the initial word הפותח each of its letters is painted in different colors, filled with animals ar floral motifs in spare ground technique. Within the horizontal arm of the ה which is painted green, framed by red and yellow is a winged gragon with a leaf like tail. Two flowers top the wide part of the vertical arms which is filled with a green leaf. The two horizontal arms of פ the are painted red surrounded by a blue frame. Each one of them is filled with an elongated dragon ??. The inwords turned arm is filled with an x like flower. The is painted red surrounded by a green frame. A dog's head within its horizontal arm, a flower tops the wide part of the vertical arm which is filled with a flower. The ת is painted blue with red frame. A winged green and yellow dragon carrying a leaf in its mouth filled the upper horizontal arm. Two rossettes top the vertical arms, a leaf within the left one. The ח is painted green with red and yellow frame. Within it horizontal arm is a dragon with a leaf like tail ????. Two rossettes top the wide part of the vertical arms, each of them is filled with a green leaf. Under the word, running over a thin pointed peace of ground are red dog with black spots caasing a hene its head truns back. From the pointed point of the ground emerges an oak tree with green leaves and green and red acorns. It two thin rounded branches, turned left and right, are surrounding the word. The bases of the arch are resting on the backs of two human figures with grotesque faces who are standing on a piece of ground. The one on the right is wearing trousers, its upper body is naked, and a Jewish pointed hat. His tangue is outstreched. His right knee is resting on the ground, while he support himself by his right hand, its palm is resting on the ground. His left hand is resing on his left knee. The one on the left is naked. A drapery covers his head and back. He is leaning forwards his head sopporting his head cover.