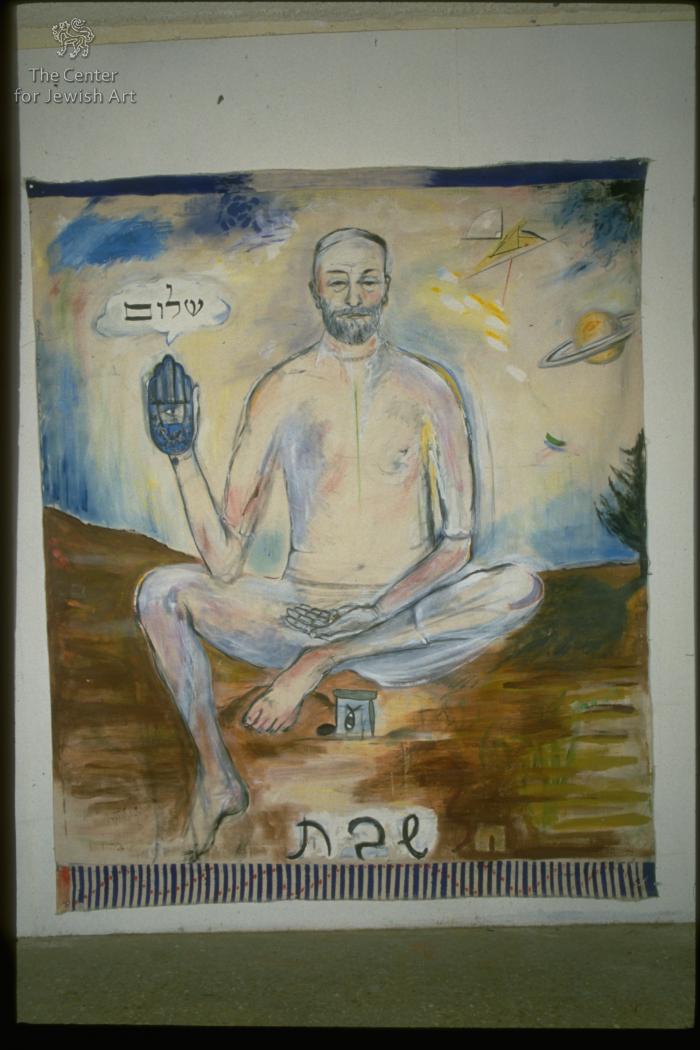 The figure of a bearded naked man covered by a filmy white transparent cloth and wearing a skullcap depicted in black outlines seated at the center of the picture on a brown ground. He faces front and his right leg resting on the ground is bent at the knee. His left leg is folded under him so as to partly conceal his thigh and loins. His left hand rests on his ankle, his palm facing upwards in a cupped gesture. His right hand is held facing the viewer with the elbow on the right thigh. The entire hand except for the thumb is covered by a tuquoise "Hamsa" charm with an eye in profile at the center. A black dot is painted below the Hamsa. A baloon signifying speech is situated just above the Hamsa enclosing a Hebrew word written in it in Setam style in black, block letters: שלום "Peace" (also "Hello"). A musical note depicted directly below his left foot encloses a form resembling an eye, a fish, and the Hebrew letter "Ayin." A Hebrew word is written in large black cursive letters in the foreground, below the man: שבת "Sabbath (Saturday)." A band of black and white vertical bars with a blue zig-zag line superimposed over them is set beneath the word. A white sky with blue clouds on the periphery is in the background and a yellow planet, perhaps Saturn, is set to the right of the man. A yellow geometrical form with unstretching lines is set above the man on the right.