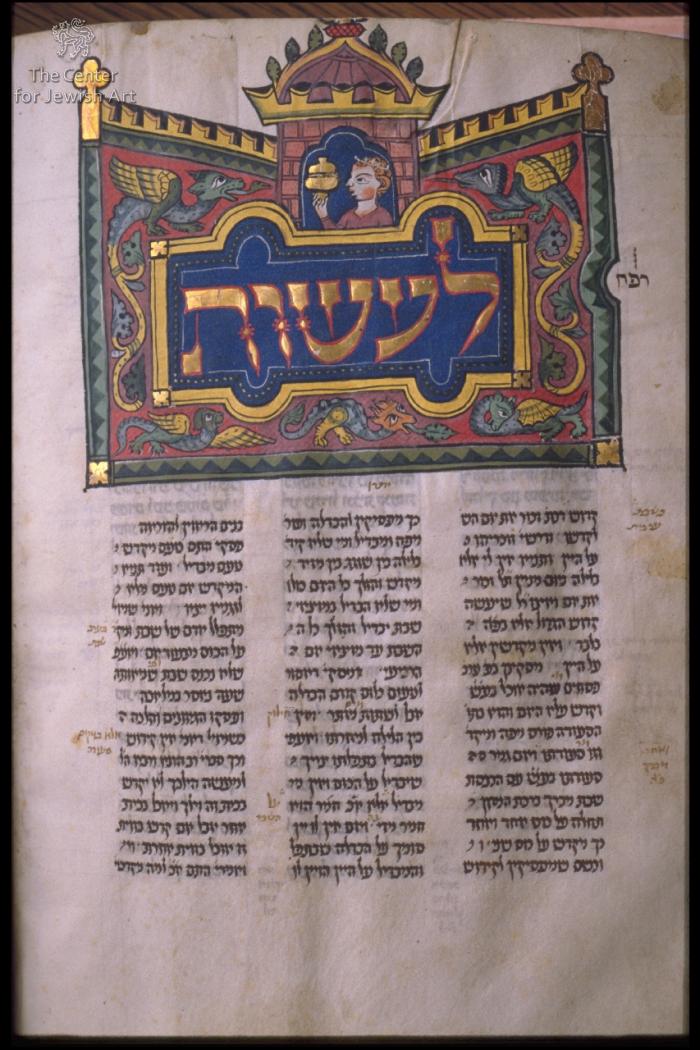 The page opening the seventh section of the SeMaK includes an architectural part-page panel occupying the upper part of the page filling the width of the text space, executed in the first stage of decoration. The panel is shaped on top as a Gothic tower decorated with crockets and contains within it a panel for the initial word, "to make the Kiddush, blessing over the wine". (לעשות קידוש) The word is written in gold and outlined in red, set on a blue ground framed by a gold border, forming four arches above and below the word, one of which accommodates the ascender of the letter lamed. It is illustrated on top by a crowned man appearing in the central window of the tower performing the kiddush for the Sabbath eve by raising a gold double cup (Doppelkopf), a well-known shape of a cup found in the first half of the fourteenth century.

The initial word panel is surrounded by five dragons on an alternating red and bordeaux checkered ground. Two winged dragons with leafy tails and leafy tongues flank the tower window, while three smaller dragons are set beneath the initial word panel. The one in the middle has a leafy tail and the other two are winged

The type of kiddush double cup (Doppelkopf) held by the man in this panel can be compared to similar contemporary drinking vessels from Lingenfeld in the Palatinate region of ca. 1330 (see Codex Manesse, exhib. Cat. 1988, p. 103, fig. 12). Both cups are wide and shallow with lids.

A similar lidded cup appears in Codex Manesse which was produced in Zürich, 1300-1340 (Heidelberg, Universitätsbibliothek, CPG 848, fol. 205). The wandering poet is depicted kneeling before the abbot, offering him a cup with an open lid.

Prof. Daniel Sperber quotes the Magen Avraham from Poland in the 17th century, who wrote:…כי טוב לקדש על כוס גדול שישייר מאותו כוס לקידוש היום ולהבדלה  ( It is good to bless over a large cup so that some will be left for the Sabbath morning kiddush and for havdalah), implying that the person who leaves wine over from kiddush to havdalah is one of the three types to inherit the next world (Sperber, Customs of Israel, vol. 6. 1998, pp. 125-8). However, since they feared that pests or poisons such as snake venom may get into the uncovered wine, they used lidded cups. Prof. Sperber notes that not many of these kiddush cups have remained and the ones known from Germany and Eastern Europe from the 16th century on, and most probably were used by worshippers in synagogue. It seems, therefore, that the illustration of the man blessing over the lidded cup in the Vienna SeMak precedes those finds (Strenthal, Hebrew Illuminated, 2000).