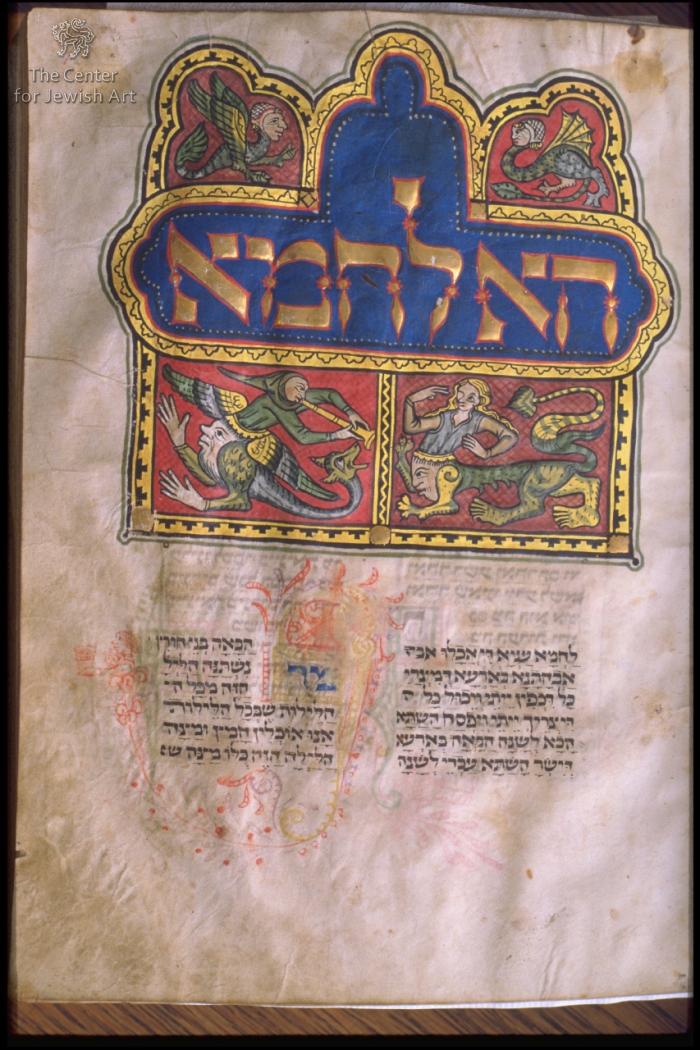 The page opening the section of the Passover Haggadah includes an architectural panel occupying the upper part of the page, executed in the first stage of decoration. The panel is shaped on top as a trefoil arch and framed by a yellow band with running geometrical motifs.

The center of the arch includes a separate blue cartouche inscribed with the initial words “This is the bread” (הא לחמא), written in gold display letters outlined in red; the ascender of the letter “lamed” pushes up the upper border of the cartouche creating the central blue section of the trefoil arch.

The blue cartouche is surrounded by four hybrids set on an alternating red andbordeauxground in separate frames. The upper two are winged dragon hybrids with human face, confronting each other. The lower two are human head hybrids separated by a band with a running wave motif. The hybrid on the right is comprised of a lioness with a grotesque woman pointing with her two fingers to her missing eye emerging from its head. The hybrid on the left is winged, with two human hands and a tail ending in a dragon's head, and from its head emerges a hooded grotesque man blowing a trumpet.

Another small initial word pen-work panel of “wherein" (מה) appears in the left text column was added in the second stage of decoration.  The panel is filled with delicate red and purple pen-work filigree. Red tendrils extend from the panel and surround the left text column, ending in a flower from which emerges the bust of a man holding the first Seder cup of wine.