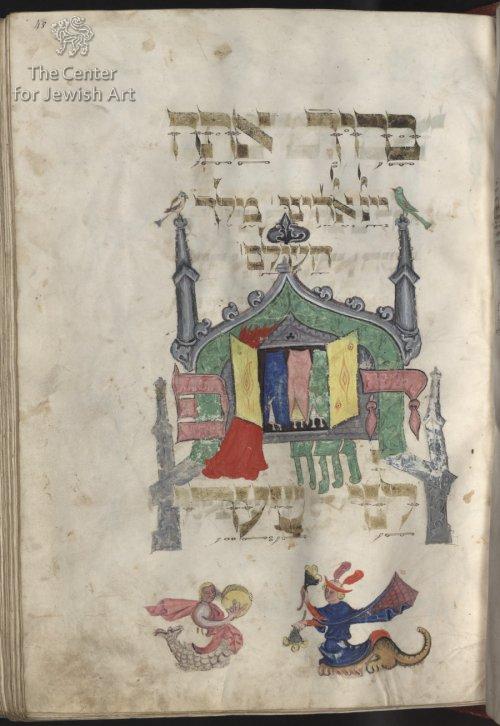 Vol. I, fol. 48: An open Torah ark enclosed within an ogee arch flanked by two tiers of turrets alludes to the prayer הפותח לנו שערי רחמים(Who openest the Gates of Mercy to us).

The ogee arch is decorated with crockets and surmounted by a finial flanked by two birds perched on the pinnacles of the turrets. The Torah ark has a pediment and two open wooden doors revealing three Torah scrolls, each standing upright on its two staves. They are wrapped in blue, magenta and green mantles decorated with a fine foliage pattern in darker hues of the corresponding colours.

The mantles are open at the bottom, showing part of the scroll with plummet lines simulating the script. Alternatively they could suggest the cloth of a wimple (Yaniv 2008, esp. p. 120). A red Torah Ark curtain (parokhet), which has been pulled aside in order to open the doors of the ark, is visible behind the left leaf. The open ark illustrates the custom of opening it while reciting this section in the prayer (Yaniv 1989, pp. 37-38).

In the lower margin two confronting hybrids are playing musical instruments: a mermaid on the left playing a tambourine, and a manticore with a feathery hat a pair of flower bells. Both have yellow hair and wind-blown drapery.