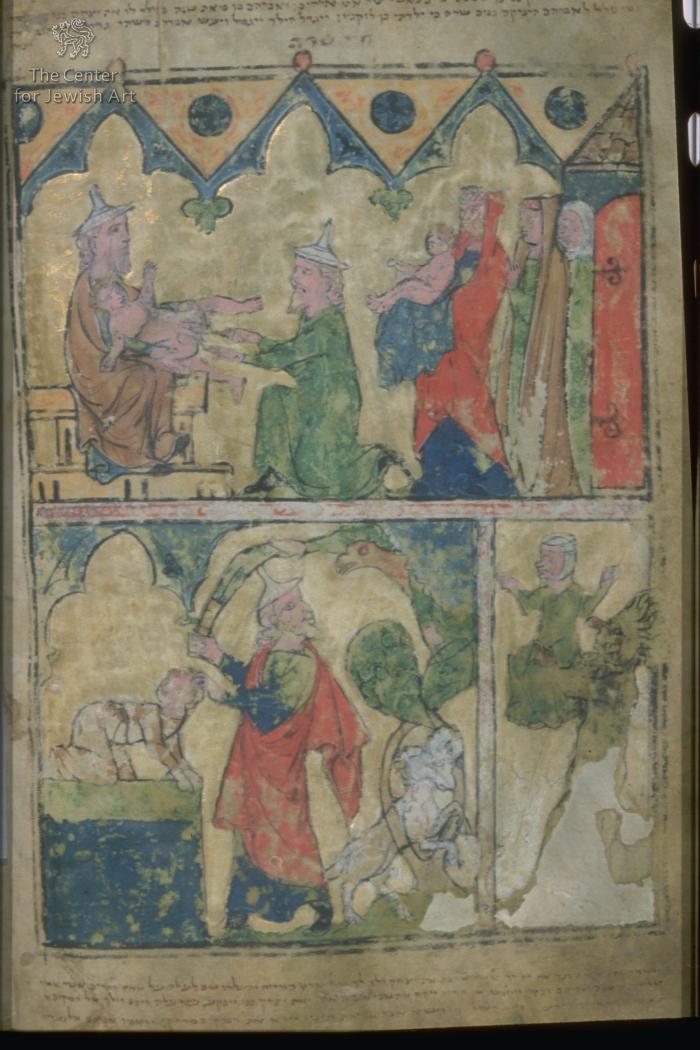 Full-page text illustration, divided into three sections each with a scene from Isaac's childhood. In the upper section is depicted the circumcision of Isaac iand in the lower section are seen the sacrifice of Isaac, on the left, and the temptation of Sarah by the devil, on the right.

The Circumcision of Isaac: Two successive scenes are depicted under three trefoil arches in the upper section of the panel. On the right two women by the door of a room (possibly a synagogue) are led by a third woman carrying the naked infant Isaac laid on a piece of cloth. On the left, seated on a two-tiered stool, the Godfather holds the naked child on his knees while a Mohel kneels before him and performs the circumcision with a knife (Gen. 21:4). Both men are bearded and wear long robes and pointed Jewish hats. It may be assumed that Abraham is either the godfather or the Mohel, while Sarah may be the woman holding Isaac.

The Sacrifice of Isaac: Abraham, bearded and wearing a pointed Jewish hat, stands in the lower left section of the panel. He lifts a knife in his right hand and holds Isaac by the hair with his left. Isaac, wearing a long robe, is crouching on his legs and hands on a cubic altar, his head turned to the left. On the top right, an eagle-headed angel emerges from the clouds holding the top of Abraham's knife with his right hand. With his left hand he points at a ram caught in a tree below him.

Temptation of Sarah: A midrashic scene of the devil tempting Sarah is depicted in the lower right section of the page. The devil holds Sarah up in the air to see the sacrifice of her son Isaac. Sarah's arms are outstretched in despair (Midrash Tanhuma, Vayera, 23).